Be Dazzled by Ryan La Sala: YA Book Review 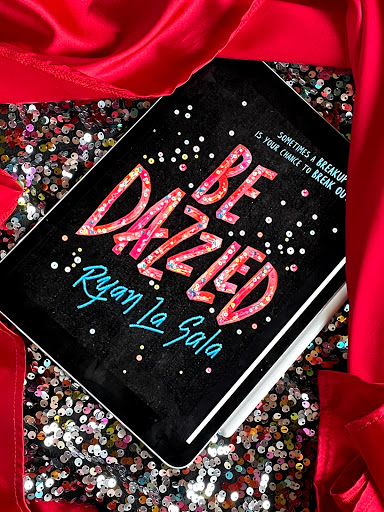 Be Dazzled by Ryan La Sala
Thank you to the publisher for providing me with an ARC so I could share my honest thoughts with all of you!

Overview: Raffy is one of the most talented cosplayers in Boston. He knows how to sew, bedazzle, conceptualize, and execute intricate costumes that allow him to embody his favorite characters at conventions. Despite having an artistic mother, she looks down on his pursuits as childish and a waste of time. Raffy is driven and determined despite the lack of support, and his focus doesn't wane until Luca stumbles into his life. Buff and a soccer player, Luca looks like the last person Raffy wants to befriend, but Luca is drawn into Raffy's cosplaying world despite having to hide the hobby (and Raffy himself) from his parents. Unfolding on duel timelines, we follow Raffy and Luca's journey falling in and out of love and maybe back in over the course of one of Boston's biggest comic cons. Overall: 4

Characters: 5 I identified with Raffy deeply. He's anxious and determined and lonely but also scared of letting others in. Raffy is secure in himself, but he doesn't leave much room for other people. He has a best friend, May, and other friends from the cosplay world, but he's not keen on letting people interfere with his work time. He's meticulous, and he's good at what he does because of it. Still, his anxiety when everything isn't going totally to plan is a bit overbearing. His relationship with his eccentric mother is basically nonexistent, and they tiptoe around each other as Raffy hides his "arts and crafts" from her. This rigidity and perfectionism is what makes Luca's attitude such a stark shift in his life.

Luca is a soccer player and absolutely gorgeous. He also loves anime and is curious about cosplay, two things forbidden in his house. He's already figured out he's bi, and his mom sort of knows, but it's a contentious topic in his house. Luca is as carefree and laid back as Raffy is anxious and precise. He's both Raffy's worst nightmare in the workshop and exactly what he needs to stop taking everything quite so life and death seriously. Though Luca mostly succeeds at getting Raffy to have more fun as they start to fall for one another, when things go south, Raffy's prior beliefs about shutting everyone out being a virtue are confirmed. I really love how their relationship progressed and taught each boy different lessons that morphed and changed along with their status. I also loved that Luca got to come into his own so much as the book progressed.

There's also an important friendship story that unfolds over the course of the book between Raffy and May. In the present timeline, May steps in as Raffy's cosplay partner after he splits with Luca. May is a talented artist, and she's already developed her own comic. She understands and manages Raffy's anxiety quite well, but she also knows how to draw the line between making him feel secure and protecting her own wants and desires. Over the stressful weekend at Controverse, Raffy also learns a lot about friendship.

Plot: 5 The book is quite intricately plotted. The present day timeline takes place over the weekend of Controversy so it's almost like a single day condescend narrative. It's aided by the alternating past chapters that allow us to watch Raffy in a neutral state pre-Luca and understand the rises and falls that happen in the year following their meeting. Each past chapter only amplifies the tension in the present, and there wasn't a timeline I was skimming to keep reading like I sometimes do. The chapters lock in nicely, and it's a tightly plotted story. I finished the book mostly in three sittings. The stakes and tension were high enough that there wasn't ever tempted to put the book down. The emotional stakes and character development met the action perfectly, which is definitely a feat few books accomplish.

Writing: 4 Ryan has a super distinct voice in his writing, which, if you follow him on Twitter, won't be a surprise. His word choice is so bright and glittery and specific. There are moments when it boarders on over the top, but it always manages to stay in the right lane. It's definitely something that you sink into more and more as you read the book, though it's a touch jarring at the beginning. I love so many aspects of this book. Conventions are my all time favorite book settings ever. I get so excited when I get to pick those up. I also love that this dug into the world of cosplay, something I've always been fascinated by but never got into. If you follow Ryan, you know he practically bleeds glitter with all the crafting he does, so all the technical explanations that Raffy gives feels authentic and well researched. He balances cluing the reader into the world enough and giving enough detail to create a clear vision without overwhelming the casual reader. Also, the book has another element that I love: small time social media fame. While it's not central to the book, Raffy has around ten thousand followers on streaming platform Ion where he crafts and chats with people watching. It's a nice touch and makes sense with Raffy's personality. As a last point, I love that Luca is bi. While I've read a couple 2021 books with bi girls (which is awesome), I hadn't encountered a bi guy character in YA, so I was thrilled this one has been added to the mix. Overall, the book felt relatable, down to earth, and like a fun peak into a different world. It manages to be an escapist contemporary novel.

Eliza and Her Monsters