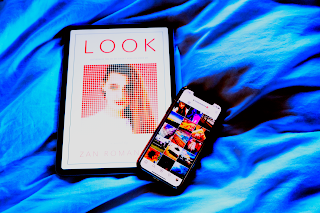 Look by Zan Romanoff
Overview: Lulu is kinda famous on Flash, the hot new social media app created by a Riggs brother. Yes, it's partially because she used to date Owen whose dad is a famous rockstar, and the notoriety hasn't been the smoothest sailing, but Lulu is well aware that the world is watching her. On the outside, her life at an elite, private high school, living in beautiful LA houses, and going to the hottest parties looks like the ultimate dream. On the inside, Lulu is wondering why she does any of it anymore. Then she meets Cass at a party and forms an instant connection. Cass just doesn't care like everyone else around her. When they leave the party and end up at the Hotel, neither of them notice a major shift that will alter their paths for better or worse. Overall: 5

I should've known this was going to be amazing when I saw all my favorite authors blurbing it.

Plot: 5 I could not put the book down. There are so many different avenues that are explored. For not being a thriller, there's a strong, pressing nature through the book and a truly unsettled feeling that makes you want to keep turning the pages. It's fast paced but takes time to get really deep in the vulnerable moments. It never flinches away from a scene. It has the perfect mix of major twists and soft, quiet, random moments. Every plot point hits the right note, and I couldn't have asked for a better resolution.

Writing: 5 There are so many cool elements woven into the book that I don't know where to start. Her building of characterization is flawless, and the book is the epitome of show not tell. It's told in third person limited, which is rare in YA, but worked here. You still feel completely embedded in Lulu's world, but it adds a heightened sense of atmosphere.
Atmosphere is probably what you'll notice most right off the bat. There's a whole world that you're transported into that feels slightly removed from your own, and Zan lays out the rules seamlessly. Everywhere Lulu goes, the setting comes to life and interacts with the plot to pull certain themes to the forefront. You get the vibe of both of her parent's houses, of Cass's house, of every party, and more than anything, The Hotel. It's constantly changing and unsettled, much like Lulu's life. Every step in its development breaks a little more of the magic and correlates with a new plot point.
It's amazing how there is so much going on but it all fits perfectly into one another. You're experiencing it all, and you only notice how many threads were involved when you sit back and think about everything you experienced. This is a truly masterfully done book.

Keep watching this space because on Saturday, I'm going to be chatting with Zan about Look! It's slightly longer than usual, and I think you're going to love it.