YA Book Review: This Is My Brain In Love by I.W. Gregorio 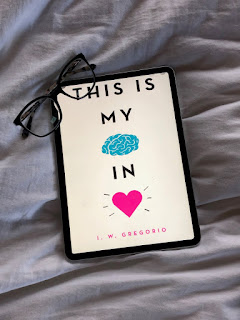 This Is My Brain In Love by I.W. Gregorio
Overview: Jocelyn has to save the family restaurant if she wants to stay in Utica. Her family has owned A-Plus, a Chinese restaurant, in the town for most of her life. Now her dad is talking about moving the family back to NYC to start over because the restaurant isn't making enough to stay open. Jocelyn doesn't want to lose her best friend, Priya, or have to start over for her last two years of high school. She takes it upon herself to revamp the restaurant and save her home.
That's where Will comes in. He needs a summer job to prove to his parents and journalism teacher that he can be a leader and hard worker. When he spots Jocelyn's flier, he jumps at the chance to help. It doesn't hurt that he immediately develops a crush on his new boss. While they fight to save the restaurant, they also learn a lot about identity and what it means to care for your mental health. Overall: 4

Characters: 4 I liked Jocelyn and Will, and I'm glad we got to see both of their prospectives. They're both extremely nuanced and have such distinct outlooks on the world.
Jocelyn has always grown up in a very strict family. Her parents are both first generation immigrants and have a strong set of values. They're extremely hard workers, giving everything they have to the restaurant. They expect the same out of their kids. Jocelyn has definitely internalized that work ethic, almost to a fault. She's smart and willing to fight for what she believes in, but she also has a lot of self doubt and constantly believes that she's not doing enough. She's self deprecating to a concerning degree, and she has no faith in herself. It leads her on a dark spiral over the course of the summer even as her efforts thrive. She still feels like she has no one to talk to. Even as Will encourages her to seek help, her parent's closed attitude to mental health and emotions gets in the way of her better judgement. One of my favorite parts of Jocelyn's evolution is seeing how her outlook and attitudes change as her family starts to shift towards sharing more with one another and being open about the fact that we all have struggles.
Will comes from an entirely different world than Jocelyn. His family has always been well off, and he goes to a prestigious private school. He has a couple good friends and is secure in his friend group. Will really struggles with anxiety. His mom is a doctor, and his dad is open and understanding, so he was put in therapy early on to treat his anxiety and panic attacks. That doesn't mean that he's entirely comfortable with his label or that those around him are completely accepting. His mom has warned him away from taking medication, and she has always made it clear that he's not supposed to talk about his diagnosis in front of their extended family. Like with Jocelyn's family, his mother's relatives have come from Nigeria and have their own biases against mental healthcare.
The parents are all very involved in the book and there are a lot of conversations about the difficulties that arise when different cultures mix and the divide between American conventions that the kids have grown up with and the values their parents hold. Jocelyn thinks a lot about racism, both when she's on the receiving end and when she watches her parent's own prejudices against others. There are some very powerful archs as many new dialogues are opened between family members and new understandings are formed.

Plot: 4 The book definitely has plenty of plot to keep you going. Aside from the emotional journeys that each character takes, the battle to keep the restaurant open is full of ups and downs. I liked the way that she approaches Jocelyn and Will's attempts to improve restaurant traffic. They are realistic to what a 16 year old could do but also show how much we're capable of.
I also really loved the storyline about destigmatizing mental illness. Gregorio shows a lot of different nuances and realities. Jocelyn would never think less of Will for his anxiety but also starts out feeling like she's not allowed to have depression or a problem. Then, once she admits it to herself, she thinks that she can't or shouldn't get help. Will knows how powerful therapy is and goes happily, but he still feels awkward about his label or sharing that he sees a psychologist with others. He also feels like medication isn't an option. One of his fears of labels comes from seeing how his autistic friend is treated where it seems like people see his difference before they see him after they find out about his diagnosis. While it's only a passing line, I found that to be a powerful moment. With a minor character who deals with an eating disorder and another who has an undiagnosed learning disability, Gregorio accurately illustrates just how normal it is for your brain to not be "normal". Together, as families, people, and communities, they learn to dispel their original biases to get the best help possible.

Writing: 4 The writing is quick, witty, and easy to read. The chapters were also short which I love. Short chapters push me to read more, and I read giant chunks of the book in one sitting. It'd be a great book to get out of a reading rut. Jocelyn and Will's voices were very distinct, and they were great characters to get to follow.