As Far As You'll Take Me by Phil Stamper: YA Book Review 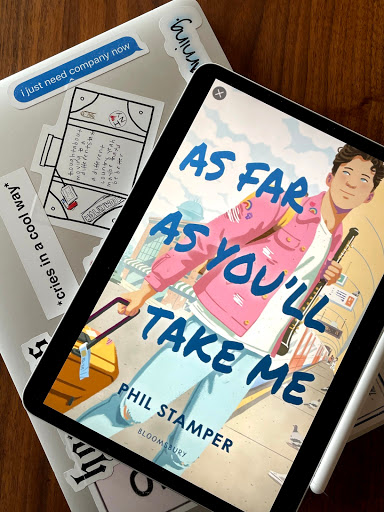 As Far As You'll Take Me by Phil Stamper

Overview: Marty is escaping Kentucky on a lie. Thanks to his dual citizenship, he's off to London to try to get a gig playing oboe in an orchestra an ocean away from his homophobic, mega church going parents. They think he's at a prestigious music school when in reality, he's just running around the city with his cousin Shane. He does make tons of friends and even has his first romantic relationship. In London, Marty gets to remake himself, even if his first attempts take him farther from the person he wants to be. Overall: 5

Characters: 5 These character dynamics are some of the most realistic I've ever seen in YA book. And I've read a lot of YA books. Marty can't wait to get away from his parents, but he also misses them when he's away. He feels guilty even though he wasn't in a healthy environment. He misses his best friend even though he's starting to see her constant put-downs were less than okay. He falls in love fast with the charismatic boy that picks him up from the airport, even though they make each other worse instead of better. None of these people are the glorified, flawed in just the right way humans that end up in YA books so often. That's not to say glorified people don't have their place in storytelling, but this is the most I've related to a book in so long.

Marty is an incredibly anxious human being. He overthinks everything and is more than a little addicted to googling. He creates bullet lists in his head or in his notes when he's anxious to try to sort everything out. Because of that, he doesn't love change. Ironic for someone fleeing to a new country with no plan, but that's life. I relate to Marty way too much. We're exactly the same age, and if COVID hadn't happened, we'd be in the exact same position at the moment- navigating a brand new, big city all alone feeling like less than capable almost adults. I still can't get over how much the entire story arc resonated with me.

The first minor character we meet is Megan. From bully to best friend, Megan was one of the few people at Marty's side all of high school. Unfortunately, she's extremely rude and backhanded. She even outs him to people. She's just generally horrible, but she pulls the "I'm the only person who will ever love you" card to make Marty feel lucky to have her around. She destroys his self-esteem and belittles his anxiety. She's the prime example of a toxic friend, and it takes Marty a lot of distance and a couple new friends to realize just how bad their relationship was. While I've never been in a friendship as verbally abusive as Megan and Marty's I definitely identified with staying in a friendship and being taken advantage of because the other person makes you feel like you'd never find other friends. It's awful to feel like a friendship charity project, and I've never seen that worked through on the page so well.

Speaking of people who can sense Marty's insecurity, there's Pierce. He's larger than life and sweeps Marty up for the ride. Marty hasn't ever been in a group of friends with other LGBTQIA people, let alone with a hot guy who seems to be flirting with him. Though it's pretty evident that Pierce doesn't have the purest motives, and even Marty knows it, he's willing to ignore that for the experience. Pierce makes Marty even more insecure, and Marty even develops disordered eating because of their relationship. Because of Pierce's comments about calorie counts or nutrition label information, Marty gets the message that his body isn't good enough, and he starts delaying eating, napping more, ritually checking the scale. It's so important to point out how others comments can have major repercussions, even if they're not directly at someone. It's both a body dysmorphic and anxiety control related response. I've never seen disordered eating that's not a neatly drawn, classic eating disorder showcased in YA like that. Again, it's incredibly realistic in all the details and very relatable in the whole situation. This less than perfect first love is probably far more common than the sweeping first love narrative, and I'm glad this story is out there to show that a lot of us go through these kinds of things.

Not all the people in Marty's life are awful. He meets tons of helpful people through his cousin, Shane, at the academy who are genuinely wonderful. They bring him out of his shell (in a respectful way) as both a person and a musician. Marty really grows up as a person in this book and learns to reframe his views of himself and the world in a super productive way. It creates a truly satisfying character arc.

Plot: 5 Most of this book is about the characters, which you can probably tell based on the super long character section. The plot comes out of their dynamics. There are some cool European trips and performance moments, but they're mostly backdrops for interpersonal interaction. The main goal of the book is for Marty to find more self-confidence. Somehow, the book is quite fast paced for not having a ton of plot. I don't quite get how that works, but I can tell you I read the book in 3 days, which I haven't done in months.

Writing: 5 Phil Stamper's voice was good in The Gravity of Us, but it didn't immediately stick out in my mind. He's truly developed his voice in this book. Marty pops off the page from the very first sentence, and I never wanted to stop reading. Every time I'd tell myself I had time for one chapter, I found myself sneaking in a second or third chapter, which is rare for me these days. This book was at the top of my TBR this year, and it's totally lived up to my expectations. Phil is now an auto-buy author for me.

Into YA with Phil Stamper