Counting Down With You: YA Book Review 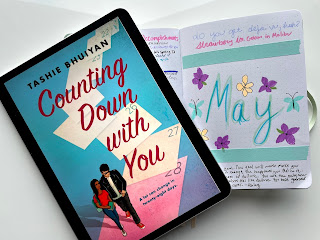 Counting Down With You by Tashie Bhuiyan

Overview: Karina's life has been extremely regimented by her parents and their many, many rules. She hasn't lived much of a normal teen life at all. And then her parents leave for Bangladesh for a month. Left in the hands of her much more lenient grandmother, Karina starts testing the boundaries of her own life. Ever the studios, though, one of her main activities becomes tutoring Ace at the request of her English teacher. When Ace ropes her into a fake dating plot to maintain his slacker image with his family, it's clear that the feelings both ways are most definitely not fake. But while Karina's life is her own for now, there's the massive question of how she'll handle this new life she's built when her parents return. Overall: 4

Characters: 4 I like Karina and Ace. They're your pretty classic good girl/bad boy mash-up. Karina is studious and a rule follower. She's battling between her love (and aptitude) for English and her parent's designs for her to study medicine. She's never defied them before on much of anything, but she's staring down setting a path for the rest of her life. Karina has a younger brother who's afforded far more freedom and two best friends who are supportive but also try to get her out of her comfort zone as much as possible.

Ace's family is rich. Not just mildly rich but gated mansion, every family member has multiple cars rich. While Ace's brother is the preppy standout of the family, headed off the Yale, Ace always wears a leather jacket and loves to cut class. But, of course, Karina is able to unearth his heart of gold as he remembers her coffee order (better than her best friend) and loves astronomy and playing piano. He's not as bad as he wants everyone to believe. And his own little rebellion against his family sometimes gets in the way of what he actually wants.

Plot: 3 We have the fake dating/relationship plot and then the character development path. My issue is that after the first third, I started to lose my will to keep reading. I've been super super busy and wasn't able to just read the whole book in one sitting (I think I probably would've liked it better if I had), so I had to make time for it, and I eventually struggled to want to. The dating plot moves a bit slow, and it's a bit Groundhog Day in stretches. This makes sense given the totally monotonous life I lived in high school, but it doesn't make for the most energetic plot. Because the book takes place over a month long span, we really go day by day with the characters. I read the book on a Kindle, so I didn't realize it until I went to put it in my spreadsheet, but this book is long. It did not need to be almost 500 pages.

The main conflict that drives this plot is the will they/won't they of the dating thing (it's abundantly clear that they will) and then the growing pains of their relationship. They see through each other easily and realize they have basically the same problem from different angles. Karina is going to live a life she doesn't want in science because she doesn't want to disappoint her parents and ruin her image. Ace is going to end up with a life he doesn't want because he's refusing to apply to Yale- or college at all- to make a point to his dad. They're both frustrated with each other for not just doing the right thing for themselves, and yet, they can't do it for themselves. I really love this conflict and working through it on the page because it's so true to the struggle that so many teens in high school go through. I just wish that the plot had moved a bit quicker and maybe skipped some days to summarize.

Writing: 4 YA books from Gen Z are going to be so incredible. I love that we have a new generation of YA writers coming up who were just teens, who share a generation with the audience they're writing for. Authors do their best to imitate teens, but there's something magical about reading a book from someone who doesn't have to try to get what it's like to be a teen today. The texting conversations felt effortlessly real, and the book just had a certain dimension of understanding that really fueled the bulk of my enjoyment of this story. Bring on the Gen Z YA take-over.

YA You Need to Read: May

It's Kind of a Cheesy Love Story Review