It's Kind of a Cheesy Love Story: YA Book Review 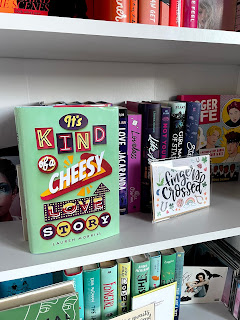 It's Kind of a Cheesy Love Story by Lauren Morrill

Overview: Beck was born in the bathroom of a pizza place. And, of course, that story has defined her for the last sixteen years of her life. She did get free pizza and the promise of a job she isn't sure she wanted out of it. Finally old enough to cash in on that job offer, Beck begrudgingly takes the job, but it turns out the pizza place might have been what was missing from her life. Overall: 3.5

Characters: 3 The characters were interesting enough. Beck is pretty naive, but she has a satisfying arc as she realizes that her school friends have always been kind of shallow. She finds a genuine friend group with the misfits who work at the pizza place. While she's always appreciated Del, the owner, she still begrudged the Pizza Princess title that's followed her around. The essential story is her growing into that title and accepting her whole life and story. Part of that is also realizing her first crush wasn't actually all that great, and it was actually the boy who people barely notices is around that's the answer. I guess what bothered me was that all the characters felt very elementary. Their lessons and the morals they're meant to impart are super close to the surface in a way that made me struggle to see them as fully realized people. I guess my favorite of everyone was a minor character named Julianne who is a loner at school but actually funny and smart and interesting- even with that being a trope that feels plenty done.

Plot: 3 Again, there aren't a ton of twists in the plot. Beck learns to love the pizza place and then has to decide what sacrifices she's willing to make when Hot 'n Crusty is in its time of need. She also realizes that sometimes crushes change and your first ideas aren't always the right one. And, of course, there's the "don't judge a book by its cover" narrative. I got through the first 50 pages fairly easy from the breezy writing and a couple fun twists, but after that point, I had a hard time getting through the rest of the book. I just never found anyone I cared about in the cast to get super invested in how the plot played out.

Writing: 4 I think most of my problem is that this book really just wasn't for me. Beck just feels so young even though she's only a year younger than I am and some of the characters are my age. I just felt like they didn't really act their ages at all, and they were only that old for the convenience of them being able to drive. I'd highly recommend this book to anyone who is looking for a bridge from middle grade to YA because this book just feels a lot more like a middle grade story than a YA one. There's just a bit too much transparency about what the point of the story is, and the motivations seemed much more characteristic of middle grade than YA. I did think the writing was breezy and fun and easy to read quickly. It hooked me in when I was initially skeptical, and it delivered on the cute premise. I just think I'm too old to really love this one.