Follow Your Arrow by Jessica Verdi: YA Book Review 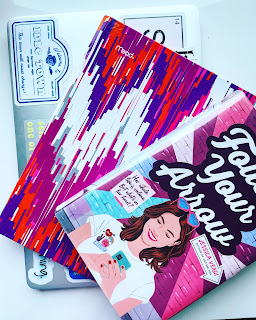 Overview: CeCe and Silvie are truly couple goals. Or that's what everyone who ships #ceivie thinks. Until Silvie breaks up with CeCe. Not only is CeCe heartbroken, but she's also dealing with how to address it with her nearly a million followers on the ominously named "app". CeCe is also navigating how to balance sharing her political beliefs with her fear of internet backlash. And to complicate things further, she starts dating a guy for the first time ever (a fact that she keeps from her followers). If you love influencers, books with bi girls, or pondering the pros and cons of the internet, you'll probably like this one. Overall: 3.5

Characters: 3 I'm craving more character development. Silvie is a junior in high school and an influencer with a stable family and her life together. CeCe is also a junior and an influencer. They rose to fame together, and their relationship definitely helped that along. They gathered many LGBTQ fans and their relationship meant a lot to many of their fathers. But that comes crashing down at the start of the book. I never really got to know Silvie or why she and CeCe were together for so long. So when CeCe is sad, it's hard to feel that on any kind of deeper level cause we haven't seen what she's lost. Then there's Josh, a violin player who wants to make it in music but is disinterested in the internet. Because Josh isn't online and seems to hate influencers, CeCe decides to keep her online life from him until it all blows up. CeCe also has to navigate her relationship with her estranged dad who became a Trump supporter and became more focused on his hateful beliefs than caring for his own daughter. That storyline was one of the most compelling in the book.

Plot: 3 The plot is a bit stilted. Things kinda drag along and then something happens randomly before going back to long, over explained moments, but there's no real build around it, so the major moments don't hit super hard.

There's the break-up to get through, a prom sub-plot that's mostly forgotten, a new romance that's a bit underdeveloped, and then CeCe's cancellation. The definitive thing we know about CeCe is that she's terrified about being political online because she doesn't want people mad at her. She thinks her parents got divorced because she spoke out against her dad's hateful beliefs, and she's scared that will happen online too. She's willing to compromise her beliefs to not make waves again. Then CeCe gets cancelled for getting caught kissing a boy, and she experiences rampant biphobia. Seeing the biphobic comments that get directed at CeCe was the only part of the book that pulled a genuine emotional reaction out of me. They stung and were truly baffling (definite trigger warning for biphobia). It was also one of the few truly accurate parts of the online world in the books. It makes me so angry. I guess I'm glad that of all the points the book tries to make, it does succeed at showing the hypocrisy and vitriol within the queer community that seriously needs addressed. It hit extra hard considering the worsening biphobia against certain YA authors and books that depict bi girls dating guys. No one should ever be told that they're not queer enough, and the book succeeds in hammering that point home.

Writing: 3 I was bound to like this book because, if I was to dream up a book I wanted to read, it would be this one. Sadly, the book itself wasn't nearly as good as the description.

My biggest complaint is the way that the internet and social media was used. Silvie and CeCe are popular on "the app". It seems like it's a veiled version of Instagram (and sometimes Twitter?). There could be an argument that Verdi wanted to craft an app that blended parts of our existing apps for creative purposes, but I don't think that's what's going on. There's no world building happening around the app, so we don't know how it works, and just vaguely calling it "the app" just annoyed me. Publishing is so scared of dating books, but books will inevitably be dated as language and, in this case, internet culture, shifts. Also, there are so many music references in this book that those will date it as well. I just wish the book had called it Instagram or whatever app the author had in mind.

I also call Silvie and CeCe influencers instead of content creators because they seem to only be influencers. We never get much of a glimpse into what kind of content they create or why people want to follow them online. It's all random live streams and public appearances and brand deals. But what content made people like them in the first place? It couldn't have just been selfies in free T-shirts. I wish that Verdi had showcased the immense amount of work that goes into content creation. Also, there are so many random hashtags used in the book that made me want to pull my hair out. No one uses social media with a million different hashtags constantly or thinks this is # this or that as they go through their normal lives. I get really picky with this stuff because I practically live online. And while CeCe has 100,000x the followers of my bookstagram page, I have gotten a taste of what that world is like through the blogs, Instagram, and following my favorite content creators. If you spend enough time consuming the internet, it's not hard to imitate those lives in a more accurate way. There was just a distinct lack of research happening here.

Also, the way that the internet and its pitfalls are discussed lack nuance. CeCe decided she was never going to use her voice online or advocate for anything. But if we're talking about how the internet works today, that would be a major problem too. You'd probably get more backlash for not speaking out, especially in the circles CeCe seems to be in. And the way cancel culture is just thrown around is annoying. CeCe, at one point amid her biphobic cancellation, talks about how she used to be happy when people got cancelled, but knowing how it felt changed her mind. I think there's a lot to explore in that revelation and the nuance behind CeCe's cancellation and the drive of others, but that's never explored, which is disappointing.

One part I did love was a point CeCe made when she finally met up with her dad again and he started talking about stuff he learned about her on the app. She discusses how uncomfortable it made her that he regularly stalked her page. She makes an excellent point about how invasive it feels and also how wrong it is for people who do know you and are in your life to cheat and get all this info about you from the internet without actually putting in the work to learn those things about you naturally in your offline life. You make content for your online audience, not for your family members, and I'd never seen that articulated so well.

I think this book would've benefited quite a bit from more development or maybe a more narrow focus. The bounds of what this world's internet is remains too blurry. If you told me it's Twitter or Instagram, I know the rules of the game, but I don't know the nuances of "the app" without being informed. I think the book might have been stronger if the high school sub-plot was dropped and CeCe's family situation was further zoomed in on as well. I'd also have loved more development of her relationship with Josh and Silvie so that those developments would've made more of an impact.

Once Upon A Quinceañera