Beautiful World, Where Are You by Sally Rooney Book Review 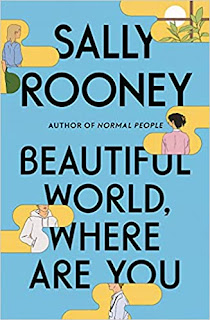 Beautiful World, Where Are You by Sally Rooney
Overall: 3
Sally Rooney's return is marked by a major shift in style. I've never been a huge fan of Rooney's books, but I find myself continually picking them up none the less. Her breakthrough book, Normal People, and her debut, Conversations With Friends, (currently becoming a mini series) shared many common style threads that are totally absent in her latest novel, Beautiful World Where Are You, that came after a 3 year break.

While I'd struggled with Rooney's books being a bit flat on the character development front, they'd always been super quick reads, especially as far as books in the literary fiction genre go. I imagine that's what helped stoke the popularity of her books.

This time, Rooney slows it down and truly sinks into the worlds of four characters, from two points of view, taking her time to allow the audience to fully explore their minds. Split between two estranged friends' stories, Rooney explores what it means to leave behind the glittering promises of your 20s and question what the true adult portion of your life will become after one took off on a rollercoaster through the stars as a wildly successful author and the other was left with many unrealized dreams. She also explores the uncertain romantic questions of the time when there is more of a want to settle into a longterm partnership. From dating apps to finally dating your childhood best friend, there are many complicated avenues the two leads navigate. While Rooney's prior books featured relationships severely lacking on the communication front, these relationships were complex and layered in a way that made it easier to invest in the couples. I also wondered from time to time if this book was a fan fiction of Rooney's own making about her life. The successful novelist character grapples with many questions that it seems like Rooney also dealt with in her ascent to fame and how awkward that can be. It was an interesting and personal layer to add to the story and characterizations.

Unfortunately, the pace is rather slow, and I spent weeks trying to get through the book. There are paragraphs that take up entire pages, and the style felt like wading through molasses. I wish that Rooney had been able to bring in a bit more of her former urgency with plot while blending it with her newfound interest in developing her characters to the fullest. I struggled with paying attention through the massive blocks of text and chapters that meandered without a clear form or indication of where they might end.

I enjoyed the writing in this book far more than her prior books, but at the same time, I think I had a better time reading her earlier work. Even though it felt slightly like hate reading, I still really wanted to know what would happen next and what dramatic twist in the relationship was coming. Here, things felt fairly settled, and I struggled to feel propelled forward in the story.