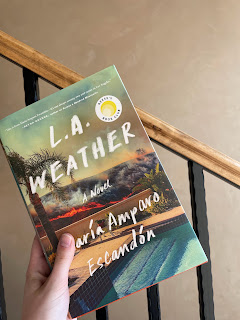 Overview: Oscar is obsessed with the weather. It rules his mood and all his days, and his family doesn't understand why. They don't know about the secret crop that is dying in the sun miles away. Keila is a successful sculpture, but her dissatisfaction with Oscar and her marriage is leaving her with little inspiration. Their three daughters are all plagued by individual issues and secretly crumbling marriages as well. Over the course of 2016, the family navigates soap opera level disaster after disaster. Overall: 3

Characters: 3 I really struggled with these characters. I just had a hard time finding much attachment to any of them. Every twist and turn felt completely out of the realm of the story and it bounced between calamities without making room to get to know any of the characters. They came off flat and one dimensional with a handful of personality traits glued on the front of each. I found myself craving the chance to get to know any of them on any semblance of a deeper level. It made it hard to get super invested in the family dynamics that were at the center of driving the story.

Plot: 3 That lack of depth also impacted the plot. There was very little grounding to each of the events that happened or relationships formed between the reader and the character, so it just felt like a rollercoaster that didn't exactly have a path. Just about every heavy topic you could imagine is sprinkled through the plot, but they're all glossed over in a way that doesn't really allow them to impact the reader on a deeper level or provoke any thoughts about it. The pace was quick, so I was able to make it through the book without being tempted to DNF it, but I finished it feeling a bit confused and empty. I didn't want more from the ending, I just wanted something more from the entire story, which did offer tons of potential. If the story had many followed one or two of the 50 introduced plot lines and taken the time to truly explore them, this would have been a much for fulfilling read.

Writing: 3 The most interesting part of this book was the format, which I did enjoy. The book was broken down into months over the period of a year with tiny vignettes labeled by the day of the week. I liked these small moments that are all packaged together over month long arcs. Unfortunately, the story often got lost in the blur and freedom of this format, and it was hard for strong narratives to emerge and structure the story. I also sometimes questioned why certain anecdotes were shared in place of others that would've illuminated more about the characters. I also did like that this book was set in 2016 and went over some of the concrete world events that happened that year instead of being forced to make up an uncertain future. Those major event dates created the only real, much needed, structure in the book.