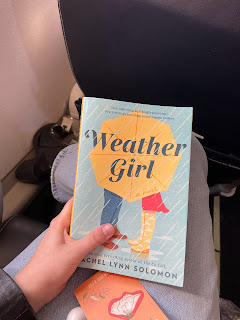 Overview: Ari has always dreamed of being a meteorologists on TV, just like the icon of her childhood, Torrance Hale. She's worked her way through different stations since college and landed a job working for Torrance and reporting on-air weather during the weekdays. Even the super early mornings can't bring down her sunny disposition. Off camera, though, the Hale's marriage is falling apart and bringing down the station, Ari's fiancé just moved out, and she's struggling with her relationship with her mom. After a failed work Christmas party, though, Ari unites with her co-worker to Parent Trap their bosses, but maybe it's not just love between the Hales that's the only kind brewing. Overall: 4

Characters: 4 Ari is a great main character. She's in her late 20s and figuring out how she wants her life to look now that she has more stability in her job and where she's living. She has a close relationship with her brother and his kids, but she feels a bit lost with her fiancé leaving her. Ari is also navigating her relationship with her clinical depression, which she's been taking medication for since college. Her mother has never treated her own depression which lead to many severe ups and downs in Ari's childhood that she's scared of repeating, and her dad leaving the family when she was young has left her insecure when it comes to love. Ari is bright and resilient and thoughtful in a way that makes her a lovely main character.

The love interest is Russ, a sports reporter and former hockey player, who bonds with Ari over their bosses being too absorbed in their own problems to pay them any attention. As they set up elaborate schemes to get their bosses back together, they get to fall in love on the way. Russ is Ari's age, but since he was a teen father, he has a 12 year old daughter. It's interesting to watch Russ navigate his evolving relationship with fatherhood and figure out how Ari could fit into his little family. Seeing Ari and Russ's daughter form a connection is one of the most rewarding parts of the book.

The Hales respectively run the news and weather parts of the station and are always actively or passively at each other's throats. They're so absorbed in each other, they don't turn out to be very good managers. There becomes a double romance of sorts as these two are also set up to fall in love again.

Plot: 4 The plot did a good job of following the predetermined layout of romance beats while making them feel fresh and unique. I really liked the exploration of Ari's mental health and her family dynamics as well as Russ's family because it made the world feel larger than just the romantic threads and added some balance. Sometimes, to no fault of the author's, I struggle with finding romance stories too predictable, particularly towards the end, but even though I generally knew how the story would unfurl, I still remained curious to see how Solomon would play it.

Writing: 4 Rachel is a fantastic author, and I always look forward to her new releases. Weather Girl didn't hit as hard for me as some of her past books, but that could honestly have a lot to do with the fact that I have a lot going on right now, and it's been hard for me to find a clear enough headspace to be totally devoted to a book. Overall, this was a satisfying read with well crafted characters and a cute couple.