We Can't Keep Meeting Like This by Rachel Lynn Solomon: YA Book Review 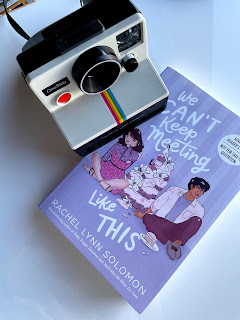 We Can't Keep Meeting Like This by Rachel Lynn Solomon

Thank you to Simon Teen for providing me with an ARC so I could share my honest thoughts on the book with all of you!

Overview: Quinn is done with high school along with many other parts of her life. Unfortunately, her obligations to her family's wedding planning company, her crush on the caterers' son who's back from his first year of college, and her complete dissatisfaction with her college plans aren't things she can graduate out of. She spends the summer in search of what actually makes her happy including secret harp lessons, and she grapples with whether love is ever real or if it's just a wedding day illusion. Overall: 5+++

Characters: 5 I absolutely love Quinn, and I'm extremely upset that she can't be my new best friend. Quinn is the younger sister by seven years and has grown up in a family where weddings are literally the family business. The issue? Her parents separated for 6 months when she was little, and she's never had a chance to process that. All the weddings seem fake and like a performance to her. She's always waiting for the unhappiness, the divorce to follow. Quinn can't imagine ever falling in love because she doesn't feel like genuine, lasting love is real. Throughout the book, she grapples with the dissonance created watching her sister get married and also finding someone that she does genuinely cares for.

Quinn also has to face that she's headed towards a future she doesn't want. Her parents have dictated where she'll go to college (so she can live at home), her major, and even her first semester classes all with an eye towards her joining their company B+B full time after college. But Quinn doesn't like working at B+B and she doesn't want to be a business major. The only issue is that she doesn't know exactly what she wants to do instead.

Playing weddings has sucked the joy out of playing the harp, but when Quinn meets a harp builder and acclaimed harpist, she starts to see that an instrument she thought she knew inside and out could have an entirely different dimension. I love how she seriously spends time considering whether she loves playing the harp in a way that would lead to a career or if it's simply something she wants to keep a hobby. So often now, it's assumed if you love something, it should be your job. I think it's so important to express that uncertainty and value using college as a time to find yourself instead of sticking to a premade plan or whatever you decided in high school. I love that she comes to a place of realizing that she doesn't have to have it all figured out to get off the path she doesn't want to be on. Her parents' reaction and the way they work through it is complex, realistic, and so important. It's hard to get out of the box you've always been put in, and I really appreciated Quinn grappling with what it meant for her to always be called "mature" and treated like an adult throughout her childhood.

Another part of Quinn is her OCD. This is one of the best portrayals of OCD I've ever read. Quinn doesn't compulsively clean and she's not really organized at all- like most people with OCD. Most of her OCD symptoms are things people wouldn't recognize as OCD from the pop culture examples. She puts her keys in her bag and then has to check ten more times that they're actually there. She has to remake her cat's water multiple times because she's scared to accidentally poison her. Most of Quinn's OCD revolves around checking. I love how Quinn talks about how disorienting it is to not be able to trust yourself, almost at all, and how disruptive it can be even if it's in a quiet way. She always goes back to the fact that dealing with her OCD centers on accepting that the world is fundamentally uncertain and unknowable.

When Tarek, the love interest, opens up to Quinn about his depression diagnosis, Quinn shares about her OCD, and it's a really great moment. Tarek asks questions about her experience coming from a bit of a misinformed place, but Quinn dispels a lot of the stigma and also educates the audience in the process. This isn't a book about OCD. This is a book about a girl who falls in love who also happens to have OCD, and I love that it's presented in that order. It's never a thing, it's just a part of her story.

Tarek is the caterers' son that Quinn's family often works with at weddings. They've grown up together, and there's always been a bit of an unspoken crush. Well, unspoken until last year when Quinn sent an email to Tarek while he was at college confessing her feelings which he promptly ignored. That really didn't help Quinn's icy outlook on love. Tarek is sweet, understand, and a true romantic at heart. His parents got together through a huge romantic gesture, and he thinks that's necessary for all his future relationship. Quinn hates them. As they go between resisting and giving in on their feelings, they also navigate their past relationship traumas together and learn to understand what you think love is might be totally different for the other person. Mostly, Tarek and Quinn learn to listen to each other, which I think is an incredibly powerful narrative for a YA book. They have more than their fair share of issues, but they truly do model a healthy relationship.

While Tarek and Quinn are at the center of the story, there are a handful of minor characters. Quinn has to navigate her relationship with her parents when her wishes and theirs suddenly diverge, Quinn's best friend, Julia, is navigating a crush on a girl who's headed to a different state than her for college, Quinn's sister is getting ready to get married and they have to deal with a changing sister relationship, and Quinn and Tarek are often joined on adventures by Tarek's cousin and his catering friends. None of these characters are particularly developed on their own, but they fill out the world in a very complete way. I also love Quinn's harpist mentor who gives her a taste of what a life outside of B+B could be.

Plot: 5 I did not want to put this book down- ever. It's a character driven story mostly navigating through tons of interpersonal conflicts, but it's also set to a lively background of wedding mishaps and exciting plot moments that compliment that growth. We intimately get into the world of the characters and experience all of those quiet moments without ever settling in one place for too long. We Can't Keep Meeting Like This is one of those books where you forget you're reading and just start living in their world. While the ups and downs of Quinn and Tarek's relationship could get frustrating, Quinn's genuine fear that love isn't real and all relationships end was so relatable and tangible that you could understand why she backs away from dating. The arc was satisfying, and I think it's a well crafted book all around.

Writing: 5 I love the humor that has been infused in Rachel's last few books. I've always been a huge fan of Rachel's writing (literally from her debut), but I think I somehow love each new book more than the last one. I have to give her another round of applause for the way OCD, depression, anxiety, and medication are discussed in this book, and I think it's so important to talk about mental health openly in books that aren't "issue books". I also appreciated how this book is on the older end of YA. It fits where I'm at in my life as I'm at the same place as Tarek, having just finished my freshman year of college. There are so many specific issues from this point in life that get missed most of the time in the gap between YA and Adult, and I loved being able to work through them on the page here. There are so many wonderful, important themes in this book discussed in a completely honest way that will help so many people. But above everything else, it's a genuinely fun read.

Thank you to Simon Teen for the ARC. This title releases June 8th

Our Year of Maybe Review