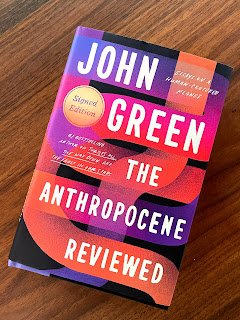 The Anthropocene Reviewed by John Green

It's a little meta to be writing a review about a book on a five start scale that's whole premise is reviewing the human centered planet on a five star scale. Maybe we're all just a million little Yelp reviews stacked on top of each other. None the less, here's my review of John's reviews, which I've given a perfect five stars even if it's not necessarily a perfect book. Five stars is a state of mind, right?

I should probably premise this with the fact that I like John Green's books despite the fact that maybe they're a bit manic pixie dream girl at times. They're not the most brilliant books in the world, but they became extremely important to me one summer. I felt seen by the "teens who don't sound like teens" according to a ton of adults on Goodreads. They sounded like me. And they still matter to me, even though, as with everything popular, they've been thoroughly dissected for their flaws. I also like his podcast with his brother and the Vlogbrothers videos that I watch whenever they show up in my recommended. John thinks in a very interesting way. I was also primed to like this book because I was a fan of the Anthropocene Reviewed podcast that was the start of the book. So with that out of the way, here's why I like this peculiar book of essays:

I've always strongly believed that a review says more about the reviewer than it does about the work itself. That's the core message of this book. Part nonfiction, part memoir, all in the context of rating the world as a way to understand it. Sometimes I think about how in the hundreds of reviews I've written for this blog and my music blog I've left a paper trail of my taste, of who I was at any specific moment in time. I've grown and changed and there's proof of that written all over these troves of reviews. They reflect on my fears and anxieties and hopes and loves. And I think that's beautiful. I honestly don't understand reviews that turn away from that personal place, that assume they can objectively review the quality of any kind of art. Each essay in this book is written with that same level of thought, intention, and awareness.

I'm honestly struggling with how to write this review in a way that's helpful to any of you. Each essay is so wildly different that it doesn't make much sense to really talk about any of them detail. The essays are earnest; they're full of metaphor. If you've read John's other books, the voice is the same. If you've followed his videos, you've probably heard most of these stories in some form before. In that way, it's almost like seeing a distant relative and hearing them tell you the same anecdotes they hold close. Yet, somehow, it's endearing instead of annoying.

There's also a self awareness in these pages that is sometimes criticized as missing from John's earlier works of fiction. Every piece of figurative language is considered, and the more existential thoughts are critically analyzed and questioned. Much of the message boils down to the fact that we know so much, but we don't know even more. We can make poetic meaning out of the best and worst in life, but that's really just band-aids over bullet holes situation. Sometimes things don't happen for a reason.

A couple pages in, I dug out a highlighter to keep with me as I read. I'm not against writing in books at all, but I just don't do it very often when I'm not reading for school. I wanted the chance to leave my first impressions all over the book. There were many lines that impressed me that I wanted to return to later. Lines that felt inspiring or comforting or invigorating. I'm excited to go back and read through them again in a few days or weeks or months.

My favorite story in the book came from a review of the Apple notes app- probably my most used app. John writes about how he dealt with all his random thoughts before the app came into existence by writing in whatever books he was reading at the time. Like full grocery lists in the margins. I can already see bookstagram shaking their collective head in disdain now. But there was something about that weird practice that resonated with me. Giving small pieces of yourself back to the book that's bearing the author's soul to you, even if you don't understand your own notes to self later. As for my own notes app, it's probably the most transparent way into how my brain works in all its messy, overstuffed, fragmented glory.

While it's not YA or terribly conventional or about much of anything, The Anthropocene Reviewed is a book that's worth reading. I intended to read it slowly over the course of a month or so- an essay each evening or something like that- but I wound up finishing it in basically a day. It's been a while since I managed to do that.

Turtles All The Way Down Review

An Abundance of Katherines Review

The Fault In Our Stars Review