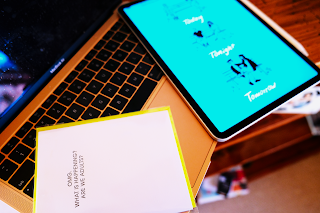 Today, Tonight. Tomorrow by Rachel Lynn Solomon
Order It From My Bookshop*
Overview: Rowan and Neil have always been a pair. No, they weren't friends and they didn't date. They were adversaries in the most equally matched game of intellectual tests. Valedictorian is the final prize between them, but there's still HOWL. HOWL is the loser's chance for redemption through the giant, city-wide scavenger hunt that the senior class participates in as a send off every year. Really, it's Rowan and Neil's game to win. The only problem: everyone wants to team up to take the two big winners down once and for all. With no choice but to join forces, they start to realize that teaming up is the only ticket to $5,000 and a final victory. The prize at the end of the night might be more than money and a title. Overall: 5

Characters: 5 I loved Rowan. She's hilarious and full of witty banter. I identified with her a lot. Beyond her academic battle, she's a huge fan of romance novels and is currently writing one. She keeps it to herself because she's scared it isn't good, but she's also endured a lot of teasing about her love of the genre. Rowan is such a prime example of how careful we should be around the things truly people care about.
I also appreciated the conversation that ran through the novel about how society reduces female centered stories and media that women, teens, and kids primarily like to being stupid, trivial, or less than.
Rowan also embodied a lot of the feelings I'm currently having in my own summer before college. I don't get to leave like she's going to, but I'm still having a lot of nostalgic feelings about the end of that giant K-12 chapter. I didn't love high school like Rowan does, but I understand the questions of regret and the nostalgia for things that never happened but could have. She also brings up the idea that she failed her younger self because she realizes that she completed none of her 14 year old self's list of important high school milestones. A lot of the book drives home the point that people do and should change over the years and that it's okay to be proud of the person you are now, even if you're in a really different place.
Neil has always been guarded and used his sharp tongue and intimidating academic prowess to keep everyone at an arms distance. He hides his family and financial struggles behind a perfect facade. He's actually quiet, attentive, and has been through a lot. Finding the ability to be vulnerable with Rowan unlocks a lot for him. Much like Rowan needs to learn that she can share her passions with others, Neil realizes that opening up about his struggles and leaning on others can give him a lot of support.
Another important facet of both Rowan and Neil is that they're Jewish. Neither of them hav close Jewish community outside the occasional trip to the synagog. They haven't had friends to share the microagressions and experiences with antisemitism that they encounter on a regular basis with. Even after so many years, Rowan didn't even known that Neil was Jewish. Listening to them talk to each other about it and find an honest point of connection with each other shows how important it is to have friends who can relate to some of those major parts of your life. Being able to share and discuss life someone who understands what you've been through opens up so much solace and relief.

Plot: 5 If you love single day stories, this is the book for you. Over about 24 hours, valedictorian is crowned, high school is wished goodbye, a giant scavenger hunt is had, and a new understanding is formed. The scavenger hunt keeps the book fast paced and with a heavy sense of ticking clock. The fact that you need 400 pages out of 24 hours means that we also get all the tiny, delicious details I crave in books. The two polar opposites in plotting and pacing style allows the book to come into perfect balance.
Also, if you're an enemies to lovers fan- this book was made for you.

Writing: 5 Rachel's writing is so witty and sharp. It's easy to fall into. This is a book that I would definitely recommend for the older end of YA and adults. I liked it a lot because I was able to directly relate to it more because it's where I'm at in life, but I think it might not be the right fit for younger teens. Even the voice feels like a crossover between YA and romance bridged by Rowan's deep love for it. It's like a romance novel that's a bit toned down and has teen dynamics, but the voice had a certain level of maturity or adultness or something I'm not describing well that felt a bit different from the typical high school YA. This makes sense considering everyone in the book is technically an adult. I'm someone who loves that YA is growing to cover such a range of different ages and experiences, but this is a book definitely geared to the higher end.
I also thought it was cool that every chapter started with a text thread, receipt, list, or some other small piece of additional information that helped enrich the world in such a tight timeframe. I'm always a fan of those little inclusions beyond the regular chapters that make the story feel more personal.
I loved the romance and the slow roll towards admitting their actual feelings. Rachel manages to balance a lot of tropes that my brain automatically tries to pick plot holes in and makes them all make perfect sense. I really appreciate that she was able to take some fun, unique, out there concepts and keep them grounded in a plausible, sincere place.


More By This Author...
You'll Miss Me When I'm Gone
Our Year of Maybe

If You Liked This Book...
More Than Maybe

New on YouTube:
Music Meets YA: More Than Maybe Playlist

Links of Interest:
Into YA with Lyla Lee
Running
Louis Tomlinson's Walls Meets YA
I Killed Zoe Spanos

*This is an affiliate link through Bookshop. Buying through the link means I will get a small commission at no cost to you. This helps keep the blog running and is a great way to show support!*
New Release Wednesday Reading Spotlight New Releases Standout Book Weekly Reviews and Recommendations