The Voting Booth YA Book Review 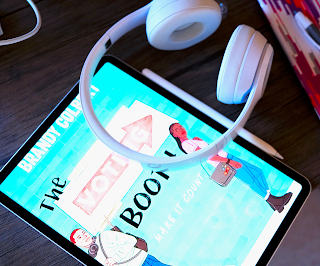 The Voting Booth by Brandy Colbert
Purchase Through my Bookshop*
Overview: Marva is an activist. She's spent the last 2 years leading up to the 2020 election canvasing, registering people to vote, and being as involved as possible. She's been waiting to vote for the last 4 years. Duke's brother was an activist and community organizer, but he got shot two years ago. Duke doesn't feel his passion, but he definitely knows the importance of showing up to vote. After meeting in line at the polls, Marva becomes tied to Duke as they go through a million different hoops so he can finally cast his ballot. Voting in the US is unnecessarily hard by design. If you've never encountered that, this book makes it abundantly clear. Overall: 3.5

Characters: 3 I liked Duke and Marva, I just didn't feel like they got particularly well developed. We know things about them. There's about five major pieces of both of them that we hear about but don't get too deep into actually exploring. It's understandable because the book is plot heavy and takes place over a single day, but there was a lot of telling as far as the characters go. Marva was a bit more dimensional, I think because we got more glimpses into her truly unfiltered thoughts.
Honestly, the characters I loved most were probably Duke's siblings, his older brother Julian and his younger sister, Ida. Julian died in a drive by shooting two years ago, but before that, he and Duke were super close. We see glimpses of the way that Julian has influenced Duke, and we get a couple anecdotes about who he was. I think Julian, and Ida too, shine so much in a short period of time because they have so much passion- Marva too. Duke, Alec, and other minor character just aren't given enough time to breath on the page to genuinely show who they are.
I wish there had been a bit more time on the character development end, but it wasn't a dealbreaker for the book.

Plot: 4 It's crazy that the way our voting works is so messed up that it easily creates the plot of a scavenger hunt like novel. Every obstacle that Marva and Duke face are ones that voters, especially in areas with high minority populations, encounter every November 3rd. And it's only getting harder.
Beyond the problems at the polls, there are also subplots about a break up, a missing cat, and getting to a gig Duke's band is playing that night. None of these really added to the story for me. I think because none of them were built up enough to get me to care about them, honestly. The stakes of being able to vote are weighty and easy to get invested in, but none of the other ones captured me. They felt like they were there to take up time between moving through the voting process.

Writing: 4 This book is a fast read. It's the first book I read in one day in a very long time. It passed so quickly, I was shocked that I'd read as much as I had. There's a levity in the writing and a straightforward path through the day that makes it easy to work through quickly, but there are still tons of important conversations that feel particularly relevant to the moment. I always find it amazing when books perfectly speak to the current moment, but these have also been problems for generations. Hopefully, we can finally address some of these major issues and start making progress.
I'm glad that so many different conversations were addressed in the book because I feel like teens are often only starting to realize important issues as they start reading YA because, until 13 or so, a lot of what you know is dictated by the adults in your life. It's so important for teens to start developing their own beliefs and widening their worldview.
I thought that the running conversation about the importance of voting was of paramount importance. So many people talk about not voting because they don't like either candidate, but not voting is both a privilege and still a vote. You cannot remove yourself from the equation. Marva also drives home the point that not having politics directly effect your life is an immense privilege. Most people don't have that luxury, so it's extra insulting and frustrating when people don't use their privilege to help those who have less power than they do.
For all the holes I mentioned in plot and characters, there were so many scenes that stuck with me. Small conversations hold a lot of weight, and those moments made the book worth reading. If you like cute rom-com type stories with a topical twist, you'll enjoy this book. It's also great as a light, quick read to get out of a reading slump.

Links of Interest:
Today, Tonight Tomorrow
Into YA with Lyla Lee
Louis Tomlinson's Walls Meets YA
I Killed Zoe Spanos

Buy The Voting Booth Through My Bookshop
*This is an affiliate link which means that I may get a small commission on the sale at no price to you. This would go a long way to keeping the blog running well into the future.