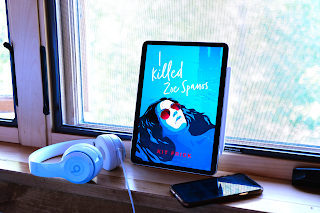 I Killed Zoe Spanos by Kit Frick
Overview: Zoe Spanos disappeared from her tiny Hampton's town over winter break. The town can't imagine what happened to her. Zoe was beloved, always a good kid, going to an Ivy League, from a perfect family, and was even in a long term, committed relationship. The police decide she must have just run away. When Anna comes to town, everyone looks at her a second too long because she looks just like Zoe. Over the course of the summer spent babysitting for one of the elite, Hampton's families, Anna gets increasingly involved in Zoe's cold case through a podcast produced by a local high schooler. The more she learns about Zoe and the longer she lives in town, the more strange memories come to the surface until she's left scared that she killed Zoe Spanos. The truth is so much more complex than anyone could have expected. Overall: 4

Characters: 4 Our main character in this twisty web of people is Anna. She's at the center of it all whether she's playing the roll of nervous babysitter or someone who just confessed to manslaughter.  Anna's past has a lot of holes in it from her many nights getting blackout drunk at parties with her friends in Brooklyn. Going to the Hamptons is a way to turn over a new leaf. It's fun to navigate through this small beach town through her eyes as she makes new friends and connections. I loved getting to see her interact with Paisley, the girl she's babysitting. It's clear that there are plenty of gaps from the start, and she's clearly forgetful, but she has these weird echoes of having been all these places before- of having known Zoe. Without the help she needs to piece it together, her panic grows slowly louder as she forms a story in her head that points to her having killed a girl she never met.
There are so many minor character in this book that work to make the story as twisty as it is, so it's impossible to go over all of them. The major players are Caden, Zoe's boyfriend of over four years who was out of town when she disappeared, Martina, the high school podcast producer who is best friends with Zoe's little sister, Aster, Zoe's sister who never gives quite the right impression, and Max Adler, who gives off bad vibes for no apparent reason. The parents and their lives as well as Anna's friends from Brooklyn contribute to expanding the worlds and all interlock in fascinating ways in the end. Over the course of the book, we solve a couple mysteries, lock these characters into place, figure out Anna's ties to Herron Mills, and even discover the identity of her missing father.

Plot: 5 This book is a major roller coaster on a variety of levels. Frick is a master at setting up perfect thought paths that get disrupted and don't pan out. She sets up layers of confusion while also putting in careful clues that stand out when you reflect on the book as a whole. It's very carefully plotted and gives reveals that only click into place seconds before the characters announce them. Everything comes to a logical conclusion, even when you're wondering if the book will just take off with a turn towards the paranormal. The book doesn't shy away from firmly establishing characters and place through scenes that usually belong in contemporary novels as we become firmly rooted in Anna's summer of babysitting as one of three storylines. I'm assuming this was a way to build trust between her and the reader before the mystery slides into full swing. While most of the past summer story feels like a breezy contemporary, the flash forwards to juvie,  confessions, and the podcast keep the threatening, questioning, mysterious feelings in the air.

Writing: 4 The writing style took me a second to get into. The structure she uses is quite complex and can sometimes be confusing. There are the now chapters written in third person that bounce through the aftermath of Anna's confession and reveal twists and turns to complement what we learn in the then sections. The main storyline is the then where we meet Anna, in the first person, and go on her summer in the Hamptons. Then there's the podcast transcripts (that are very well done) that give us, and Anna, all the details on Zoe's disappearance that you've been wondering about. At the end, there's also a first person chapter from the killer, though it's slightly confusing because, in the past, first person was only used for Anna when the killer is open to being anyone.
Overall, I'd say these three threads were handled very well. All the plot notes hit in the proper places to make all the parts sing in unison. The third person pieces definitely improved as the story went on, but they start out a little clunky. In an attempt to make it seem deeply atmospheric (and pull from the Rebecca inspiration), the writing gets away from Frick a little and almost made me quit with the first chapter. The first person narrative flows much more naturally from the beginning, and the podcast transcripts are built well. The writing eventually becomes something you don't notice anymore, which shows how good the story is, but expect a slow burn on everything getting started and to the action.  It's nearly 400 pages, and you can feel that in the book.

Visit My Bookshop
(Affiliate Link; I may make a small percentage from these sales at no cost to you)

Links of Interest:
Bad With Money
Into YA with Jennifer Dugan
My Eyes Are Up Here
June 2020 Month In Review
New Release Wednesday Reading Spotlight New Releases Weekly Reviews and Recommendations