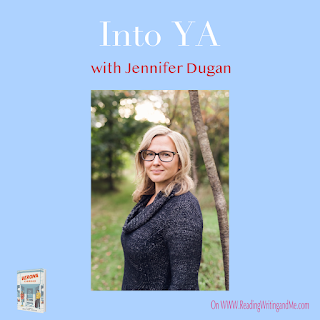 I'm so excited to introduce my first repeat author for Into YA! Jennifer Dugan is back on the blog to chat about Verona Comics, one of my favorite books of the year (and probably all time). If you've followed my blog for any amount of time, you probably know about Verona Comics by now, but if you want a refresher or some context for our conversation, check out my review of it here.
Also, if you're curious about my first interview with Jennifer about Hot Dog Girl, you can find it here.  And if you want to get a copy of Verona Comics or learn more, here's a link to her author website with all the links.

1. I absolutely love that Verona Comics is such a clear nod to Romeo and Juliet. Did you set out to write a modern retelling? You explore and contextualize a lot of the more toxic elements of the original story. Were there any major changes that you had to make to Shakespeare’s outline to make it fit YA today?
I actually didn’t go into Verona Comic’s with the idea of making it a modern retelling. I just wanted to talk about these two teens from dramatically different sides of the same industry. However, once I started fleshing it out, I realized there were a lot of parallels and decided to really lean into it. I had a lot of fun trying to figure out how to incorporate the more recognizable moments in a modern way, like the balcony scene which now takes place on a back deck!
I knew right away that one of the biggest changes I was going to make was going to be in terms of addressing the codependency and general toxicity of Romeo and Juliet’s whirlwind relationship in the source text. I really wanted to unpack that and depict Ridley and Jubilee going through it in a more realistic way in my book. I came to consider it more of a Romeo and Juliet “fix-it” then a true retelling.

2. One of my favorite parts of your books is that they always have the coolest settings (Hot Dog Girl is set at a rundown amusement park and Verona Comics is set at a comic convention and store). Is setting an element that helps define a book early on? How does setting shape a story?
Settings definitely shape stories in a major way. Someone growing up sheltered in a tiny town is going to have a very different frame of reference for the world than someone traveling around to comic-cons and cello performances! For me, setting is very much tied to character building.
For this one, since I also write comics, the decision to set a novel in the comics industry was pretty simple. I spend a lot of time in comic shops and at comic cons, it’s a setting I am very familiar with—but also one that gave me lots of room to play.

3. Ridley’s dad plays a major role in the book even though we rarely see him on the page. One of Ridley’s main motivations is to gain approval or attention from his dad. Over the course of the book he learns to unpack those issues. I love that this book shows the real impact parents have on their kids even in their absence. What led you to make a point of this in the book? Was it important for you to show Ridley’s journey to truly process and work through it instead of packing it away?
I don’t think it’s a secret that I love exploring complicated characters, and Ridley and his father are no exception. As someone who didn’t have the best homelife growing up, it was really important to me to show the ways that parents’ actions can affect their children… but it was equally important for me to show that it can get better. We can find other resources and support systems outside of our immediate family.

4. Two aspects of the book I really loved were the mental health representation and the LGBTQIA rep. Whether it was Jubilee expressing her uncertainty around labels, Ridley hesitantly telling Jubilee about being bi or him choosing to seek inpatient care for his anxiety and depression, the characters’ choices and identities were always met with overwhelming positivity where it mattered most. I think that goes a long way to normalize making the best decisions for yourself. Did you intentionally place a positive emphasis on these moments in the story? Have you gotten to see the meaningful impact that has on, particularly teen, readers?
So many bi/pan people (and people who are still working on figuring out their labels) share the same story of not feeling queer enough when they are in differently gendered relationships. I wanted to include that in Jubilee’s arc, but it was also very important to me that Jubilee had a loving, thriving, queer community that challenged her as she processed those feelings. I wanted readers who may be in a similar place to see the validation first hand, and to understand that sexuality is not tied to whomever you’re dating at a set point in time.
In regard to Ridley seeking help, it was also crucial to me to show mental health services and support groups in a positive light. I’ve seen too many books in the past which vilified therapists or had characters scoffing at the idea of taking meds. Asking for help when you need it is one of the hardest and best things you can do for yourself. I also added a list of resources at the end of the book to encourage people to reach out.

5. You’re a comic creator yourself, much like Vera is in the book. Did your other job help inspire this story?
I definitely borrowed from some of my real-life experiences while working on this. In between selling my comics, I end up spending time people watching while tabling at various comic cons, which really helped inspire this book. I even snuck some easter eggs into the comic con scenes for some of my friends who travel with me to events!
And while I’ve never had a Kickstarter go fully viral like Vera’s do, I did use it to fund my comic, Circadia. Kickstarter, and other crowd funding platforms, can be a great way to find diverse stories that aren’t always supported in traditional media.

6. I had been excited to read Verona Comics from the moment you teased it in our last interview. Do you have any new projects you can talk about yet?
I recently announced my next YA novel, SOME GIRLS DO, which will be out Summer of 2021. It follows Morgan, an out and proud track star who falls for Ruby, a closeted, bisexual local beauty queen with a penchant for fixing up old cars. It’s dual POV, like Verona Comics, so readers will get to see things from both of their perspectives.
I also expect to be sharing news on another project very soon. I can’t say much about that one yet, except that it’s thematically similar to my previous books, but also incredibly different. ;)

Books From This Author...
Verona Comics
Hot Dog Girl
Into YA with Jennifer Dugan

Links of Interest:
My Eyes Are Up Here
June 2020: Month in Review
Coming Up In July
Aro/Ace/Demi Book Love