My Eyes Are Up Here- YA Book Review 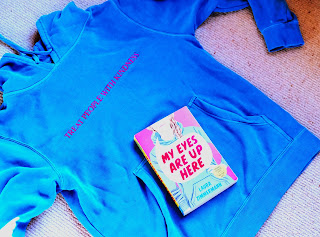 My Eyes Are Up Here by Laura Zimmermann
Overview: Greer's life has been governed by body insecurity. She hides in XXL sweatshirts to try to take her chest out of the conversation. It doesn't stop the cruel jokes, the pain, the logistical nightmare with sports, and the impossibility of finding a dress that feels made for her. Over the course of her sophomore year, she starts to test the self-imposed limitations as she gets closer to the new guy, tries out for the volleyball team, and takes her voice back from society and her body image constraints. Overall: 4

Characters: 4 Greer is such a fun main character to follow. She is sarcastic and has a worldview that really matches my own, so we clicked quickly. She's a realist with a streak of idealism. A lot of identity comes from her braininess as she leads all her classes, and she uses it as a way to compensate for trying to pretend her physicality doesn't exist. This emerges for a wide variety of societal pressures that is unpacked throughout the entire book. Some of these, Greer doesn't even realize until she reflects back on them. She pushes herself out of her comfort zone consistently and is generally rewarded for it. A lot of these characters share a similar level of relatability.
Greer has two main friends in the book, Maggie and Jessa, that help shape her journey. They have very different outlooks on the world than Greer because they've faced different sets of experiences, even though they agree on the same basic principles. Maggie is vocal about social justice to a degree Greer finds a touch performative, but she's always trying to be on the right side of issues. She pushes Greer to love herself and step out more boldly, but she also isn't able to see some issues from Greer's perspective. Jessa is a new friend from volleyball. Jessa leads the team, and Greer admires her confidence and leadership skills. She also loves how Jessa equates her body to power and celebrates it for what it can do instead of how it looks.
Siblings and family also play a big role in this book. Most of the plot points involve the Oates family, who Greer meets through her mom's job as a relocation consultant. Greer gets to know Jackson by helping him adjust to school, but because her mom is helping his family figure out the town, they're at Greer's house a lot.
Greer has a super realistic love-casual hate relationship with her brother, Tyler. She also gets to know Jackson's 8 year old sister, Quinlan. For me, Quinlan was a bigger, more impactful part of the story than Jackson. She starts out seeming like a completely menacing, emerging kleptomaniac, but as she attaches herself to Greer, Greer comes to understand that her behavior is a manifestation of her deep loneliness and urgent craving of permanence because they move so often. In a weird way, I related to Quin most of all. Her storyline was one of the most compelling parts of the book, and these moments were shown with some of the most poetic scenes.

Plot: 4 A lot of the book revolves around Greer thinking about her boobs. She's even named them. This is a huge part of the start of the book and comes up very directly in almost every scene. I found it interesting but hard to relate to personally. There were moments that fit slightly awkwardly into the plot at the beginning. I also originally struggled with reading about a fifteen year old, which is weird cause I'm only two years older, but the more I read, the more the book opened up and captured an increasing level of nuance.
You come away from the book understanding the intersection of misogyny, body image, and the true repercussions of certain things you can't control in your life. Body wise, I am the opposite of Greer. I haven't honestly given my boobs much thought, which is a privilege in itself. I have dealt with debilitating health issues that half the population won't ever have to deal with because they're male. I have dealt with trying to use baggy clothes to erase my body from the narrative. I have gotten dress-coded and targeted for what I was wearing when I chose to dress differently. I've had what I was wearing eclipse my excellent standing as a student to the school administration.
There was one scene that particularly got me that Greer reflects on when she was 4. She was at a store playing with an engineering toy where she was intellectually excelling far beyond the boys that were there, but the adults only wanted to talk about her outfit and how pretty she was. That the day she stripped fashion and appearance out of the equation by choosing to wear baggy, bland clothes. There are lots of conversations about how clothes factor into how women are perceived, and this was a very poignant addition. If you're reading this, just reaffirm for yourself that short skirts and straight As are not mutually exclusive, as much as people want to push that divisive narrative.
I inherently get a lot of Greer's struggles, even though I don't share hers specifically. This just shows how far reaching these issues are and how much mental space and time so many of us lose to fighting or contending with our bodies physically and within society's expectations. Most women will find some of this inherently relatable, even if not directly. It also pushes the idea that body image issues go so far beyond weight. If you've been lucky enough to not have to deal with any of these things, these super specific scenes make it impossible to ignore how intense and life shaping of an issue it is. It might make you a little more empathetic and aware.

Writing: 5 Laura has a voice that is striking from page one. I immediately latched onto it because it was a lot like my inner monologue. This is a very internal book. Greer has a ton of thoughts, and I want to hear them all, but if you're not a fan of that, this might not be the book for you. All the interactions between characters (especially within families) are so hyper realistic in a way books don't normally capture to that degree. The voice was the biggest treat for me.