YA Book Review: I Wish You All The Best by Mason Deaver 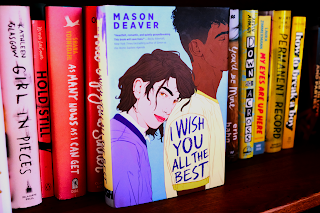 I Wish You All The Best by Mason Deaver
Overview: Ben is nonbinary. The book opens with them working up the courage to finally come out to their parents. Even though his parents are religious and conservative, Ben feels like it might be okay. Mostly, they feel like they can't keep living with a secret that big. They want their parents to know them fully. Instead of love and support, they get thrown out of the house. Ben calls their older sister who they haven't seen in ten years, but she shows up right away. As Ben transitions to living with their sister and her husband, they have to navigate a brand new school, a new family situation, and a new therapist all at once. While it's a lot to process, Ben comes out stronger, healthier, and happier on the other side. Overall: 5

Characters: 5 Ben and I have honestly nothing in common yet I found them so incredibly relatable on a minute detail level. We have a ton of similar thoughts and reactions and just life philosophies, which was really fun to read about. It's proof that you can really connect with people who aren't necessarily like you. I think it's Ben's combination of complete fear with the world and the small rays of optimism that I find so appealing. Anyway, Ben was a joy to follow through the book.
Then there's their sister Hannah who they barely know before they start living together again. They meet their brother-in-law for the first time the night they get picked up from the CVS they went to after getting kicked out. I loved Hannah and Thomas's role in the story. She's accepting and wonderful. They both try incredibly hard to make Ben feel comfortable and loved. It's so heartwarming and beautiful to see a family that forms in a different way. It also explores a sibling relationship on a far deeper level. Through therapy, they also address their lingering resentments and issues with each other despite the fact that they're immediately in a better place when Ben and Hannah come together again as adults. I loved this plot point and how it unfolded over the course of the book. Family relationships can't be fixed with bandaids. Even though Ben and Hannah understand where the other was coming from, voicing it in a mediated therapy session and openly addressing the past was so important. As much as we'd like to forget it and move on, you have to go back to what's broken if you're really invested in fixing relationships.
I also love Thomas's character. He's thrown into a weird place taking in his wife's sibling he's never met. But he never misses a beat. He immediately works to make Ben comfortable, gain their trust, and get them into school. Thomas also seems like a great teacher. Both Hannah and Thomas are very human, but they are also some of the best humans.
Ben never really had a community at their old school. They have a very standoffish approach to school as a self protecting thing. Nathan doesn't have the same reservations, though. Nathan is such a bright, caring, happy go lucky character that brings up the book. I love how understanding Nathan is, and he doesn't give up on Ben as they struggle with their mental health. Nathan's just so understanding and supportive. He's a great addition to Ben's growing support system.
Then there's Ben's online friendship with Mariam who's a nonbinary internet creator. Ben found their vlogs and immediately made a connection. Even though they haven't met, they offer a sense of support to Ben as they quietly struggle with their identity.
To finish Ben's backbone, there's Dr. Taylor, the therapist Hannah pushes them to see. While the relationship starts hesitant, they actually form a super valuable partnership to work through Ben's trauma and burgeoning anxiety issues. The super positive, yet honest, portrayal of therapy is so important to get out there.

Plot: 5 The plot is basically about Ben working to add all these people to their life and become more sure of themself. It's a very day by day slice of life story, which I love. It's a story of coming into yourself and gaining confidence in tiny, careful, safe steps. I appreciate that the book speaks validity of identity at every step, and that it reaffirms you don't have to be out to everyone for it to matter. Ben takes small steps and gets stronger with each one. It's really a joy to see. It's also further proof that you can find a support system and a family on your own. The bonds here are really beautiful.
The other side of the plot has to deal with Ben processing the instant loss of their family. They weren't treated the best at home. It was either abusive or borderline abusive (which was why Hannah disappeared when she turned 18), but Ben never expected to be thrown out.
This is a sort of a mini spoiler, but as their parents reach out to try to lure them home, the question becomes "How much do I have to love my parents?" Or the question of whether you have to forgive your parents because they gave birth to you. I think about this a lot, but it's particularly interesting in this context where Ben was deeply hurt by them, and their motives for wanting them back is so mirky. Ben struggles with whether they get to fully acknowledge how deeply their parent's hurt them. The issue is super complex, and Mason handles it with so much care.

Writing: 5 The writing is captivating. Mason is a truly gifted writer. This is the kind of contemporary YA that I just soak up. There's universes of emotional layering to pick apart as you read, but the plot line is so simple. It's just life. But life is endlessly fascinating. I Wish You All The Best captures that style at its best. The writing is so immersive. You will fall into the book and won't be able to come out till it's done. Incredibly beautiful and moving. So thoughtful.
I bought this book as a preorder a year ago, and I ended up not reading it until now. I've been trying to finish all my unread books on my shelf, and this one stuck out because of Pride Month. It was the perfect book for the mood I'm in right now. I guess that perfect book finding you at the perfect time thing is right.


Links of Interest:
Audiobooks Recap
Bi Book LoveI'll Be The One You Should See Me In a Crown
Standout Book Weekly Reviews and Recommendations