You Should See Me In A Crown YA Book Review 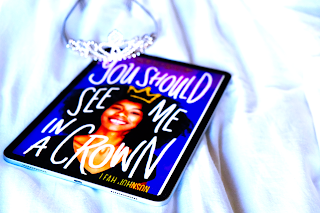 You Should See Me in a Crown by Leah Johnson
Overview: Liz never thought she'd run for prom queen. It's a deeply entrenched tradition on the suburb of Campbell, Indiana. Though it's mostly a show of popularity, there is a scholarship for the king and queen. When Liz doesn't get as much financial aid as she needs to go to her dream school, she signs herself up to compete. After many weeks of community service and competitions, prom season manages to change the course of Liz's senior year. Overall: 5

Character: 5 I loved Liz! She was such a great main character to follow because she has the right amount of optimism and reality. She has a lot happening in her life that she has to juggle and keep up with, and I could definitely identify with her feelings of never having done enough. Over the course of the prom season, she forces herself to come out of her shell a little more and get comfortable with throwing herself in the middle of the mix. It also causes an identity struggle. Liz has always made herself smaller and quieter as a defense, and when she starts her campaign, her best friend, Gabi, insists the only way she can win is if she conforms more. Gabi makes her wear suburban country club mom clothes and pushes Liz to keep her sexuality a secret. Luckily, over the course of the book, Liz finds proof of what she knew all along- being herself will get her a lot farther.
I think we all know a Gabi. She means well- or you think she probably means well- but she does a lot of damage in the process. Her microagressions and more than subtle homophobia towards Liz under the veil of "meaning well" or "wanting it to be easier for her" leaves Liz doubting herself while also feeling uncomfortable with the alternative. Hopefully readers will use Liz's experiences with Gabi as a way to look at their own interactions with those they love and remind people to check their language and what they decide to say to other people. As time goes on, Liz does what's right for herself and starts to distance their friendship, and I thought it was a great example of how friendships don't have to be one level of close forever.
Jordan is also a great character. He was close with Liz when they were kids, but they grew apart in high school as he joined the popular football crowd as his avenue to acceptance. Over the course of running for king and queen together, they're forced to interact more often, and they're able to work through their past misunderstandings. I loved seeing all these different friendship dynamics and how certain people are just a better fit for that particular moment of your life. Jordan was also there for so much of her childhood that he inherently understands a lot of the outside stressors she has to deal with. He's a great example of a quality support system for Liz and her struggle with anxiety.
Then there's Amanda who starts school right as prom season kicks off. With died hair and multiple nose rings, she looks like the last person who would want to run for prom queen, but that makes her all the more interesting to Liz. The more they hang out at community service projects, the more they find they have in common. They're both funny, their obsessed with the same band, and they're both queer. While Amanda's past isn't super delved into, this seems like Liz's first time exploring the possibility of a romantic relationship. Amanda is the perfect person for that as she's so understanding, attentive, and stable in the hurricane that has taken over Liz's life. You can tell that the people in her life always come first.
Family is also an important part of the story. After losing her mom to sickle cell anemia as a child, Liz has lived with her grandparents and her brother. Her brother also has sickle cell, and Liz always has an undercurrent of worry about his health. She also works a part time job and works to help out her grandparents who have a lot on their plate.

Plot: 4 The main plot revolves around the epic prom competition. There's no way to properly explain just how elaborate this competition truly is without just making you read the book. It's worth picking up for the prom antics alone.
Through these challenges, Liz also maps out her identity and her relationships. She's torn between being what her friends see as "competitive" and being herself. Through those conversations,  she feels pressure to keep her relationship with Amanda under wraps to improve her odds at queen. Seeing that Campbell is a rich, predominantly white, midwestern suburb, everyone feels like Liz is starting behind, and they make a lot of assumptions about what their classmates will respond to. Usually, I really dislike the "let's keep our relationship a secret" thing because you always know how it'll go and the reasons always feel avoidable, I understood Liz's motivation wholeheartedly. She was convinced by school policy and who was leading the race that being openly queer would ruin her chance at the scholarship she desperately needed. This isn't right or even true, but as you follow Liz, you understand her fear completely. I still felt horrible for Amanda, but it made sense. You're always wondering whether Liz is being set up to succeed or fail, but by the end, you're so invested in the characters that it feels like it matters less who wins and loses. You get the sense that Liz will be able to figure anything out.

Writing: 5 This book was a great read! It managed to be light and perfect for summer fun reading while also getting in tons of important points and grounding elements. I loved that her family story was so featured and had its own arch because it is such a part of getting to know Liz. The fabric of all the different friendship were also so intricate. It felt very true to life and in full brightness.
The writing is so fun and easy to slip into and engage with. I have been in a massive reading slump (this is the only book I've read all of June), and I'd tried reading a ton of different books. This was the only one that was able to hold my attention, and I finished it in three days.


If You Like This Book...
Immoral Code
Have a Little Faith In Me