Have a Little Faith In Me Review 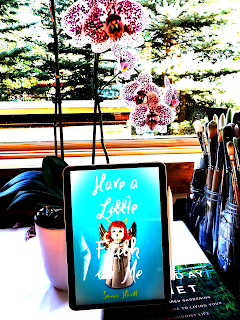 Have a Little Faith In Me by Sonia Hartl
Overview: CeCe and Paul have no reason being at Jesus camp. Paul gave up his faith years ago when his paster father abandoned his mother,  and CeCe never really believed to start with. They're not there to find their faith again, though. CeCe is on a secret mission to win back her born again boyfriend who dumped her after having sex. Whether it's love or just proving something to herself, CeCe is determined to get Ethan back, even if that means fake dating her best friend, Paul, and listening to hours of sermons. While CeCe shakes the camp up, she starts to shake up some ideas of her own about what happened with her and Ethan. Overall: 5

Characters: 5 I love CeCe. She's bold, unflinching, bright, and impulsive. Unafraid to be quiet about her own beliefs she challenges a lot of the misogynistic happenings at the camp and vocally questions why girls are left to shoulder the responsibility for "tempting" boys by not being modest or doing a billion other things they should be allowed to do. Though she causes a lot of problems for the camp, she digs at the root of a lot of problems that come from society constantly shaming women. Reflecting on her first time, she starts to see some of the same problems that came from her own warped view of how things should be. This makes her an even louder crusader for spreading empowerment and the real meaning of consent among a bunch of people preaching abstinence.
The girls in her cabin- Mandy, Astrid, and Sarina- are all also excellent characters. They all come from different backgrounds and are actually devout Christians, but they accept CeCe and learn a lot from her. While keeping their faith with them, they start to question some of the teachings that they've never quite felt right about, and the girls form a sisterhood, cheering each other on and protecting one another.
Then there are the boys across the lake. Paul is a total cinnamon roll. He's a crush worthy character that's sweet and thoughtful. He paints a sharp contrast to problematic Ethan, but each additional character has their own place to add meaning to the book.

Plot: 5 I normally hate fake dating because the person they're trying to win or win back is usually so obviously not worth it, but the way that Hartl opens CeCe's eyes to Ethan's toxic ways almost the second he gets to camp allows the fake dating to melt away into a perfect device to facilitate this best friends to lover's romance. Their existing bond and friendship made Paul and CeCe such a fun, lovely couple to root for, and they made. me smile the whole time.
I also love the other side of the book's plot where CeCe causes a sort of reckoning with everyone. She and Paul have seen how hypocritical the belief system can be and they work to call attention to that. Like in the real world, not everyone cares to examine themselves closely in the mirror, but their actions make for some great educational and entertaining moments.

Writing: 5 Hartl had me hooked. She made. me fall for a trope I didn't even think I liked, and she made me feel like I was at camp too. I fell for her loud, sarcastic, strong narrator, and her love interest made me truly swoon. She also makes you think about society and how certain beliefs and values are actually really screwed up when you stop to think about them. She doesn't flinch when discussing how women's bodies are often subtly shamed and seen as weapons almost, and she dives into the lasting harm that attitude can have this book gets an A+ all around.