Into YA with Sonia Hartl 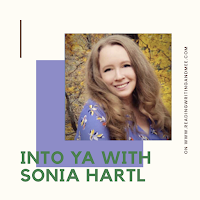 I'm so excited to host this interview with Sonia about her new book Have A Little Faith In Me which comes into the world on Tuesday. The book is delightful and one I flew through. If you haven't read my review, I'd suggest you read it for a bit of context!

1. I have to ask, where did you get the idea to set the whole story at a conservative Christian camp? It’s so perfect for the story but also a very unique idea.

I really wanted to set a story that is largely about sexual education in place where abstinence education is more prevalent. Not so that I could position my main character as more knowledgeable, but more so I could show that while she thought she was fairly knowledgeable, there was still a lot she had to learn. I thought this would be especially effective in a setting with girls who were learning along with her, so they could support each other and open up to each other and inevitably grow as characters because of what they each bring to their friendship as individuals. Often times in media, the ‘good’ girls (virgins) are pitted against ‘bad’ girls (not-virgins), and I’m 110% over sexuality defining girls. Setting a story in this place allowed me the opportunity to show the incredible ways girls define themselves, and that sex and different beliefs aren’t a line in the sand.

2. You tackle some serious topics with a very thoughtful spin over the course of this generally jovial book. In between antics and sometimes during them, you make points about consent, the harm of pushing modesty on girls or shaming their bodies as “tempting” or “distracting”, and the harm that can be done by a society that makes sex completely taboo and leaves young people clueless. Were these always central points to the story? Do you think that pairing these themes with a fun, summer book will help the message be more easily digested?

These were definitely always central points in the story. I wanted to dig deep into the construct of virginity, pull no punches on defining consent, and break down the ways ‘protection of purity’ so to speak is often placed solely on the shoulders of girls. I don’t think I was going for more easily digestible with the humor and summer vibes, I just really enjoy writing humor and romance. And I think romance especially has always been a genre that challenges the patriarchy and gives a voice to things that girls and women often discuss with each other. Reading a romance novel to me is like having a private conversation with a really good friend who gets me.

3. CeCe and Paul have very intricate backgrounds that inform a lot of the choices they make. Did the characters come to you with fully formed backstories or were these ideas developed as you got to know them better?

They sort of unfolded as I wrote them. I didn’t plot this book, I just sat down and started writing one day with nothing more than a really loose premise, so their backstories became more fully formed the deeper I dug into the story. On the surface, they had these facts about them from the start, but the heart of their stories developed once I really found their voices while drafting.

4. I love the friendship story between CeCe and the girls she meets at camp. Even though they all have different points of view, they create an amazing, sister like bond. What was it like forming those characters and friendships, and were they always such a major part of the story?

I love writing friendship just as much as I love writing romance. I think the feelings are just as intense and just as important as romantic love, and female friendship especially is pretty amazing. I always knew I wanted CeCe to become friends with her cabinmates, and that I definitely didn’t want girl-hate or a fight over Ethan, but the depth of the friendship surprised even me as I was drafting. The more I wrote interactions with the girls, the more fully formed they became, like they became whole and solid characters because of each other. The sisterhood the cabin eight girls formed is one of my favorite things I’ve ever written.

5. I absolutely loved Have a Little Faith In Me, and I can’t wait for your next project. Can you tell me about anything that’s planned or in the works that we might be seeing sometime soon?

My next book, NOT YOUR #LOVESTORY, will be out Fall 2020 with Page Street. It’s about Macy Evans, a YouTuber who lives in a rural town with her mom and grandma. When a woman at a baseball game live-tweets Macy’s every interaction with the guy sitting next to her, creating a fauxmance for her followers, Macy is thrust into viral fame and a whirlwind fake relationship, which drives a wedge between her and the small-town boy she really likes.


Books by This Author...
Have a Little Faith In Me: Review Here