That's Not What Happened 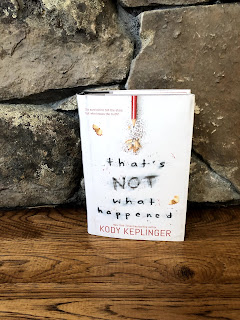 That's Not What Happened by Kody Keplinger (325 pages)
Overview: It's been three years since the school shooting in Virgil County and the youngest group of survivors are about to graduate. While Lee is glad to finally be moving on, she also doesn't feel right about leaving the story the way it is, to fade and distill in everyone's minds. And then one of the victims parents decides to write a book about their daughter's courageous show of faith when she confronted the killer before she died. As powerful as the story is, it's simply not what happened. Lee knows this first hand because she was with Sarah in that stall when she got shot. Lee wants to spread the truth, but the town might not want to hear it. Overall: 4

Characters: 4 Lee makes a great narrator for the book. She'll navigate you through social circles and small town relationships with expertise. She's serious yet witty and funny. The other survivors are also interesting. Denny, a blind student, was shot in the arm and became the focus of major media coverage as he learned to use his cane again. Eden had to witness her cousins death, and Miles was cast as a hero, even though everyone thought he'd be a burn out before that day. The only two other immediate survivors have had complete opposite experiences tied to the same event. Kellie, the other girl in the bathroom got chanced out of town for trying to set the story straight while Ashley was the one who shared the inspiring story of Sarah standing up for her fate.
While some of these characters are better drawn than others, they all have an important role to play.

Plot: 4 The story of recovery and spreading the word is an interesting one. It's removed from the incident, but not that far. And it's dealing with a rumor that has had time to mature into fact. While Lee is still healing, her story is about a journey to set things right. It almost backtracks her recovery. The book is really about small towns and how the loudest members of the community can rewrite history over the people who witnessed it.

Writing: 4 The story is told in a sort of extended episilary format. It is all technically one giant letter with other letters interspersed. I liked the immediacy and the direct direction at the reader to draw them in. While I always have a hard time with the exact dialouge in books of this format, I did think that it suited the story. I've only known Keplinger's work from anthologies, but I was glad I enjoyed it just as much over a whole novel.