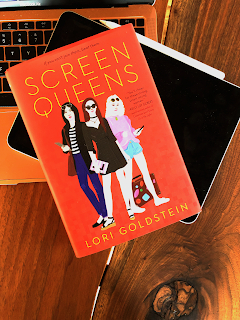 Screen Queens by Lori Goldstein
TW: Sexual Harassment
Overview: Valley Start takes fewer applicants than any of the Ivy Leagues. Lucy, Delia, and Maddie are three of the 2% who made it. They are also the only female team at the tech incubator. While their personalities originally clash, with mentorship from a female CEO, friendship at a tech camp on the campus, and a new sense of understanding, the girls band together to strive to be the first all female team to win. Along, the way, though, they uncover more sinister layers to the shiny Silicon Valley world they stepped into. Overall: 4

Characters: 4 Lucy is headstrong and independent. While she's great at coding, she's even better at presenting, selling, and stylizing. She's on a mission to redeem herself in the eyes of Stanford to get off the waitlist and in the eyes of her icy tech CEO icon of a mother. Lucy is a touch insecure masked by her overconfidence and the experience actually helps her develop closer connections.
Maddie also has a single goal. She wants to win so that she can give her graphic design business the final bit of credibility it needs to boom, allowing her to skip college and care for her brother full time since her parents aren't physically or emotionally available for their family. Like Lucy, Maddie learns more about opening up and being vulnerable to forming connections.
Delia too doesn't want to go to college. She wants to get into Silicon Valley as a programmer so she can support her family and save their theater that her parents love so much.
I love that each of the girls start with a very singular focus and slowly pushes forward to a broader. world view and more emotional intelligence.

Plot: 4 While they're working towards winning the completion, each girl plows forwards to realizing their own goals and reasons for coming to the camp. Sometimes the story splits in three ways where as other times they stand fully united. While the idea of winning the internship at Pulse starts out shining and fascinating, soon the cracks begin to show with CEO Ryan. It's easy to tell he's sceezy from the start, so it's extra fun to see the girls stage their elaborate take down.

Writing: 4 While their were a couple plot holes in shifting details throughout the book, I'm super impressed overall. The book is written in third person, which usually bugs me, but I absolutely loved it here. It's the perfect format to tell these interweaving stories in a concise yet nuanced way. The key here, though, is that it's told in limited third person with super distinct voices that works better for this book than even a triple POV story set. Honestly, the execution of the POV was the biggest win for me in the book.