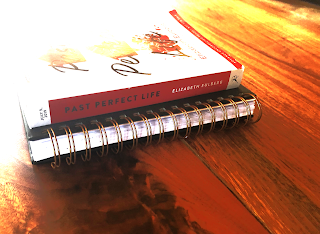 Past Perfect Life  by Elizabeth Eulberg (July 9)
Overview: Ally Smith has lived for almost her entire life in Wisconsin. She briefly remembers living in Chicago, but it's always been just her and her dad. She's made a life in the town and become almost family with the Gleasons who basically own the town. Her perfect life is shattered, though, when an error with her social security number on her college applications alerts the FBI that she's actually a missing person. Overall: 4.5

Characters: 5 Ally is an awesome main character. Her voice and handling of emotions is so relatable, and I love how articulate she is. The emotional hurdles she jumps through are so shocking, but she makes them make sense. It's almost like a reverse savior situation she finds herself in as she's taken from her "perfect" life and dropped into one that looks much more "perfect" from the outside.
The Gleasons are great additions too. They're her best friends and protect her when her world is turned upside down. They're developed enough to bring the story to life but don't steal the focus.
The parents are also all very complex characters. Her father, though he kidnapped her and is probably mentally ill in some way, was a wonderful, caring father that no one suspected anything about. It creates an interesting conflict within Ally when her loving father is ripped away from her and replaced with a distant, controlling, and constantly disappointed stranger of a mother. While I won't give away too much about the family she's sent to, I will say that her step father is really the best and finding out she has a half sister makes for interesting character opportunities.

Plot: 5 I could not put this book down. I read it in less than a day I was so into it. Seeing how her life changes starting from her stable Wisconsin life is fascinating. It's amazing all the complexity that is thrown at Ally.

Writing: 5 Eulberg has done an amazing job of handling the emotional depth and complexity required of this story. It would be easy for a parental kidnapping story to fly off the rails, not go deep enough, or curve in the wrong direction, but the execution adds another layer of wow to it. The only thing I wish I got more of was the ending. On the final page, Ally is left in a promising yet super open place as she has a couple interesting next steps ahead. It makes me wish that a sequel was coming to follow it.


Links of Interest:
What's Coming Up In July: Here
Brief Chronicle of Another Stupid Heartbreak: Review Here
Our Chemical Hearts Movie: Here
Call It What You Want: Review Here