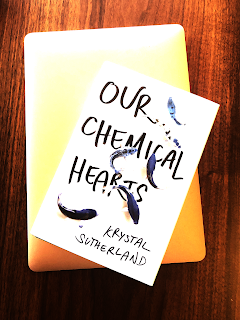 Another YA movie is slated to come to the big screen, or, well, your laptop. Amazon Prime seems to be jumping into the YA movie game which has had a surprising to me massive surge in the last few years. The book they're adapting? Our Chemical Hearts by Krystal Sutherland. I was somewhat surprised when I first heard via lead actress, Lili Reinhart's, Instagram story because the book came out in 2016, and, from what I saw, remained relatively quiet.
I do like the idea of books that aren't blockbusters in their own right getting adaptations, and I honestly think there's more room for success because every viewer won't necessarily be going in with their passionate views of how it should look. As for this specific book, though, I'm a little weary.
I first read Our Chemical Hearts in the summer of. 2017, about a year after it was published. Back then, I was just starting to. get into the blogging, and honestly, super critical reading groove, and I wasn't quite so careful about evaluating representation. From what I remember, I liked the book. I'll link my first review of it down below. Since the details are so fuzzy, I'm planning a reread (since I somehow still have my original copy despite moving) closer to the film's release date, but I've also read more reviews of the book written by disabled readers who use a cane, like the main character, Grace. While there were some parts that were okay, most readers (like in this review on Disability in Kidlit) found much to be desired in the romanticizing/manic pixie dream girl portrayal of both Grace's disability and mental illness.
It will be interesting to see if the film has enough self awareness to try to improve on the portrayals in the book three years later. It seems like there might be some changes as Teen Vogue even noted the backlash to the seemingly ableist views of the book. Perhaps with some attention to detail and sensitivity, as well as the movie being able to refocus the point of view the narrative is coming from, the story can be brought to life in a productive way.
While I would usually be a bit more pessimistic about a project like this, I'm hopeful based on the team behind it. Grace will be portrayed by Lili Reinhart, who is also executive producing for the first time. Though Lili is an able bodied person, she's also an outspoken advocate for mental health issues and seems like an aware person. Also, she always puts on an amazing performance, giving Betty grounding and humanity, in Riverdale, regardless of where then scripts go. Elite Day also notes in their announcement that the film is working with the organization RespectAbility. Though this has no guarantees about the final product, the organization does work to fight stigma against people with disabilities, and the fact that they've been brought in is a promising sign.
It's other executive producer is Jamin O'Brien, from Eighth Grade, which was also very well received for portraying tough issues. Richard Tanne is directing and has written the script, which will be interesting as he'll have more freedom to execute his vision to the fullest. They have also announced Henry's casting recently. He will be played by Austin Abrams, who is currently in HBO's newest "teen" show, Euphoria.
While theres' currently no release date, though it is currently filming, I will be interested to see how the final product comes together/ I'm also excited to see more streaming companies getting into the movie game, as I'm never thrilled about heading to the theater.


For My Original Review...
Our Chemical Hearts: Review Here