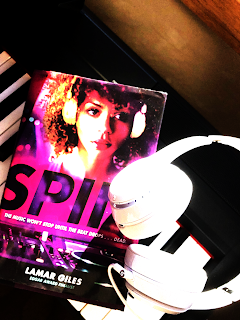 Spin by Lamar Giles (387 pages)
Overview: Fuse and Kya have lost their best friend. #ParSecNation lost their leader, and the Dark Nation has decided to do something about it, even if it means terrorizing those who were closest of her. DJ Paris Secord, or ParSec was murdered at a warehouse she planned to throw a party in. Fuse and Kya found her when they'd come to make amends for different issues they'd rather the public, or the cops, not know about. But they both want to see Paris's killer caught, so they might have to overcome their differences and work together. Overall: 4.5

Characters: 5 Fuse, Paris, and Kya all get a turn to narrate the story which I enjoyed. They each have their own voices and personalities that really shine through and bring a different angle to the same storyline.
Fuse is rich. Her dad runs a successful marketing company, and she shifted what she learned from him to making Paris's music and brand famous. She helped Paris climb the ranks, but, at the top, the fame and impending big deals starts to separate them.
Kya is one of Paris's oldest friend and originally helped her wire old equipment into DJing and music devices they could use, but, when Paris takes off, she becomes so absorbed in her career that she forgets about Kya and won't listen when tragedy hits Kya's life. It drives a deep wedge between them.
But seeing it from DJ ParSec's view up until the day of her death provides a good reminder of how we all see the world so differently, and one reality isn't everyone's.

Plot: 4.5 I enjoyed trying to solve the mystery with Fuse and Kya. I also loved that it was really less about the mystery and more about them. There are false leads, and you think you've figured it out until they start flying in another direction, but, looking back, the killer makes total sense. It's a justified reveal which I think is important and a sign of good writing. I wish it had been slightly shorter though as the end started to drag.

Writing: 5 I have to applaud Lamar for his ability to create distinct voices in a dual POV and to create entrenched atmosphere. It felt like I was right there with all of them. I also think that he did a great job justifying the use of three points of view. Often, it feels unnecessary to have so many voices chiming in, but. he made it integral.
I also want to take a moment to applaud Giles for writing "clean YA" that didn't want to make me scream. The atmosphere was intense, and it felt like a realistic teen world and experience without a mention of sex or a single cuss word. And I love that because younger YA readers need books to help them transition from MG to YA. I often have a problem with these books (and generally avoid Scholastic books because of it) because they feel like they were written and then scrubbed clean after certain elements had been present (also fake cuss words make me roll my eyes), but there was none of this here. There was no absence, and everything made total sense.
I'd definitely recommend this to readers who love mystery/thrillers who aren't looking for the edgier/grittier stuff that seems to be most common in the genre.