Patron Saints of Nothing Review 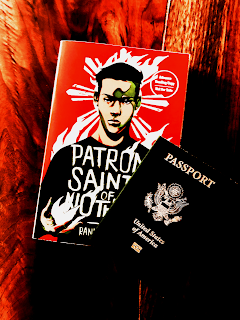 Patron Saints of Nothing by Randy Ribay (June 18)
TW: Minor mention of animal death, talk of drug use/addiction, state/police violence
Overview: When Jason learns that his cousin in the Philippines was murdered, something doesn't feel quite right. Not only has he lost a relative who he was almost like brothers with at one time, he also suspects that his death happened in suspicious circumstances. After receiving shreds of proof from a DM on Instagram, Jason heads to visit his family in the Philippines over spring break to try to find justice for his murdered cousin. Once he's there, he realizes the harsh poverty, drug crisis, and governmental dictatorship that is so easily simplified in Western media. Overall: 4

Characters: 4 I liked a lot of the characters, especially Jay. Coming from America with an American mom, Jay is always insecure about being Filipino enough and is often made fun of by his relatives in the Philippines for it. He experiences a culture that is his own like an outsider which makes for an interesting perspective as he works to get to a place where he personally feels comfortable with his identity. He's also working to get answers in an environment that prizes secrecy and brushing things under the rug.
His relatives that he reconnects with are also very well drawn and are some of my favorite characters. His aunts are so cool and understanding and his cousin, Grace, and her friend, Mia, are some of the most interesting secondary characters in the story.
The remarkable thing is that everyone honestly follows their own arc and honestly show at least some growth at the end.

Plot: 4 Once you get into it, it's easy to get swept away in the hunting of the mystery, the reconnection of family, and the broader history and culture. Towards the end of the book, I found I couldn't read fast enough, waiting to explore the final resolution even though there can never be a satisfying conclusion to a story of a senseless murder.

Writing: 4 I have to commend Ribay for the amazing way he brought a place I've never been and admittedly know little about to life in such a vivid way. I feel much more familiar with the place, and I now want to learn more about it. As Jay points out, the United States doesn't have an education system where you learn much about other countries. I love that this book will be able to bring awareness while also being so entertaining and compelling.


If You Liked This Book...
The Astonishing Color of After: Review Here