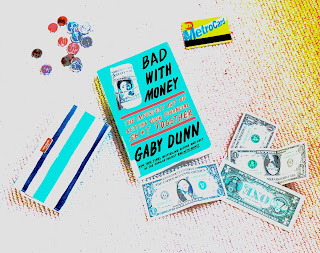 Bad With Money by Gaby Dunn
Overview: Gaby gained online popularity through YouTube and her time at Buzzfeed which later lead her to create the podcast, Bad With Money. After the success of her podcast, she decided to take what she's learned and turn it into a comprehensive, personal finance memoir that could simply lay out the basics in language that people as confused and scared about money, like herself, could easily understand. This book quickly takes you through all your major financial moments from high school till your death. Overall: 4

I think the value of the book to you is really dependent on if you've heard or plan to listen to the podcast, particularly season 3. I found the book through the show and then got it from my library to see what else she had to say. Unfortunately, the book doesn't go much beyond what happens on the podcast. Most of the experts referenced are the same people who are on those specific show episodes with the exact same quotes.
In some areas, Gaby does go far more in-depth. Logically, these are the areas where she's already had personal experience. I really loved the beginning of the book where she fills in a lot more details on her first jobs in high school, her financial situation in college and her unpaid internship disaster as well as what her experiences with freelancing were like. These were the most memoir-like sections, but I found them particularly interesting because I anticipate starting down a similar path to Gaby. Also, since the world of freelancing is so confusing, she breaks down the realities of it well.
Her voice is great and well crafted. She makes the book easy to get through quickly and injects humor into even the most depressing or mind bending chapters. Even the parts that I skimmed because I'd just heard those episodes of the podcast were still engaging enough that I didn't want to skip them entirely.
I also want to give her props for her chapters on dating, and taxes. In the money and dating chapter, she looks at the ways that money has impacted each of her past, failed relationships regardless of whether she was the one with more or less. She discusses power imbalances that come into play when someone makes substantially more, and she talks about paying for everything or nothing based on her situation. She also interviews other couples on their experiences that are new interviews. The taxes chapter was also a great way to introduce the concept to people just getting started, especially when it comes to the intricacies of freelance tax policies, which more and more of us will have to get to know. She puts it in easy to understand language and acknowledges when things are ridiculously overcomplicated. Gaby is happy to acknowledge that even as the author, she doesn't fully understand everything. The book is well researched, but it's mostly based around antidotal interviews and Gaby's own experiences stumbling into lessons and eventually getting an accountant.
The only parts of the book that lagged for me were the sections about things like marriage, medical bills, and wills because Gaby has less or no personal experience with them. These chapters almost entirely rely on people she's interviewed on the podcast and those same stories. They're still amazingly compelling stories about how our existing systems hurt us and how people have been put into substantial debt, but if you're a fan of the podcast, you won't find anything new there.
Before I wrap this up, I also wanted to point out that this is a great, inclusive book on finance that takes into account the experiences of minorities- women, LGBTQ community, and racial differences- that are so often left out of the conversation. She acknowledges how the cookie-cutter financial advice sometimes isn't applicable to them and how they generally start out behind or hampered in different ways. The systems are not set up for their needs, so working within the system presents a challenge in itself. Both Gaby's book and show are the most approachable and introductions to the world of money that I've found. I also think it's a great way to introduce yourself or a young person you know to the confusing realm. As a teen, I found it helpful, and for the first time, not a discussion I wanted to run screaming from. I finished it in a little over a day.

Links of Interest:
Into YA with Jennifer Dugan
My Eyes Are Up Here
June Wrap Up
Books I'm Looking Forward to in July
LGBTQ Nonfiction Reading Weekly Reviews and Recommendations