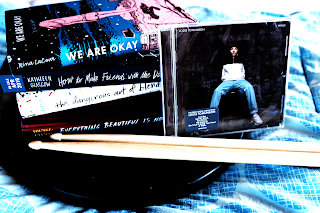 I haven't made a Music Meets YA pairing in a while, and I thought I'd bring it back. If we weren't living with COVID-19, I would be seeing Louis Tomlinson tonight with my mom on his first headline tour. Obviously, those kinds of gatherings were cancelled a while ago, but I thought I'd have a little fun by matching his first album, Walls, with some YA books. If you want to give Walls a listen, I'll leave links to it down below, and you can find the individual book reviews by clicking the title. Also, I'll include buy links for each of these in my BookShop store in case you want to pick up a copy. It is an affiliate link, so I might make a small commission at no cost to you.
Have you heard Louis's music before, or are you a fan of one of these books? Let me know in the comments!

We Are Okay (Always You)
Get a Copy
This book is short and quiet and is the closest prose can get to poetry without crossing over. It's all about the images. Marin fled California early for New York where she's starting college after her grandfather's death. She takes almost nothing. She says goodbye to no one, and she lives her her deep sadness through the first semester. Over break, her best friend (or maybe more) Mabel comes to see her. For three days, they're forced to confront the past that Marin can run but can't hide from.
"Always You" is about geographically running from your problems and ignoring the right answers in an attempt to cope. Through the song, Louis realizes that the answer is more simple than going around the world. It was right there all along. While the music is much more upbeat than the book, they do share the ultimate triumphant feeling of being reunited with hope. "I went to Tokyo to let it go/Drink after drink, but I still felt alone/I should've known".

How to Make Friends With The Dark (Two of Us)
Get a Copy
Both the book and the song are going to make you cry. They are totally devastating (though all of Kathleen's books are). In How To Make Friends with the Dark, Tiger has to navigate the foster system in the wake of her mother's death. It was always just the two of them, and they were super close. Tiger wears the dress her mom bought her for the dance that she'd originally hated for months afterwards in an attempt to hold her closer. I spent the whole book crying because the descriptions are so clear and visceral. You can read more about the book in my interview with Kathleen Glasgow.
"Two of Us" is a song Louis wrote after his mother passed, like Tiger's mom, tragically young. The song promises that he'll keep her memory alive even as he navigates the intensity of grief. Like the book, it's truly beautiful in the way it works through sadness. "It's been a minute since I called you/Just to hear the answerphone/Yeah, I know that you won't get this/But I'll leave a message so I'm not alone".

The Dangerous Art of Blending In (Walls)
Get a Copy
Evan Panos lives in an abusive household in a tiny, conservative town in a family that puts religion over everything. He doesn't fit at home, and he has to hide being gay which adds to the stress. When he starts to realize his connection with his best friend, Henry, might be something more, his world opens up a little. Henry tries to convince Evan that he's worth more than his mother's abuse, and Evan starts to realize that blending will keep hurting him more.
"Walls" is about learning to let the world, or at least one person, in. The lyrics talk about learning to overcome your situation and find your strength and voice. There's also an element of someone you love helping you come to an important realization. "But these high walls came up short/Now I stand taller than them all/These high walls never broke my soul/And I watched them all come falling down".

Everything Beautiful Is Not Ruined (Don't Let It Break Your Heart)
Get a Copy
Ingrid's opera singer mother flamed out. Their lives collectively fell apart. Now she's spending 3 weeks in the Canadian wilderness with a group of "At Risk" youth. Could it get any worse? The dual past and present narrative presents an expansive, emotional journey. Fair warning, both my mom and I cried (on an airplane no less). It's still her favorite YA book I've given her.
"Don't Let It Break Your Heart" is a song that's been through a lot, just like Ingrid. It's uplifting, warm, and promises that there are better things to come in the future. The sadness of your present isn't a doom for the future, and that's the message that the book gives you too. "What hurts you is gonna pass and/You'll have learnt from it when it comes back/You'll be doing better, yeah, doing better."


Listen To The Album
Walls by Louis Tomlinson

Links of Interest:
I Killed Zoe Spanos
Bad With Money
Into YA with Jennifer Dugan
My Eyes Are Up Here