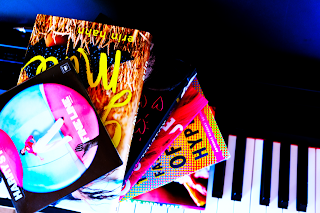 Since we're all bored and stuck inside, I wanted to post more often on here. I can only read so fast, so I thought I'd try out a new little series. If you've followed me for a while, you know that I absolutely love books and music. I run a music blog that I occasionally post on (here's a link if you're curious), but I wanted to find a way to blend my two loves.
I've recently gotten a ton of CDs that I've been lining up on my bookshelf, and it made me wonder if I could pair some of my favorite books with my favorite albums! The following is what came out of that random burst of creativity. I picked out books that I thought went with the vibe of each album and then tried to fit them with specific songs and lyrics. Let me know in the comments how well I got them to match up! Hopefully you enjoy these cause I have a couple more planned right now with artists like Julia Michaels, Taylor Swift, Olivia O'Brien, and Halsey. I'm also open to suggestions! Each book title has a clickable link to my past review of the book, and I'll leave a link to the album at the end.

You'd Be Mine (Falling/Canyon Moon)
If you've followed my blog for a while, you know I absolutely adore this book! It's only fitting that a book about two touring musicians lands on this list. You'd Be Mine told from both Annie and Clay's points of view, so I picked two songs from the album that reminded me of them.
First up, a lot of Clay's struggles in the book remind me of lyrics from "Falling". Clay confronts the fact that the industry, and not dealing with his past trauma, is causing him to become a person that he doesn't recognize- that he doesn't want to be. It also starts hurting his relationship with Annie. "What am I now/What am I now/What if I'm someone I don't want around?"
Next up is Annie. She has a real sense of nostalgia and a longing for home. I feel like she would love the most country sounding song on the album, "Canyon Moon". Like Annie, the song has a joyful exterior with an undertone of loss. "Staring at the ceiling/Two weeks and I'll be home/Carry the feeling/Through Paris, all through Rome/And I'm still thinking back to

A time under the canyon moon"
The Summer of Jordi Perez (Adore You)
The Summer of Jordi Perez is a book that epitomizes summer just like "Adore You" sounds like summer. The connections don't stop there. As the song is sharing the elation of new love, Abbey falls head over heels for Jordi. And, Abbey is super fashionable which pairs with the interesting looks in the music video! "Walk in your rainbow paradise/Strawberry lipstick state of mind."
Tash Hearts Tolstoy (Lights Up)
This is another book that's among my all time favorites. I paired it with "Lights Up", which is still one of my favorite songs on the album, because it's a story of Tash really coming into her own. The song grapples with a lot, most of which can be interpreted as either dealing with fame or embracing your honest self. Tash deals with both over the course of the book. Both the song and the story come to the same conclusion. Sometimes, it's not the most convenient to be totally honest with yourself, but it's far better than the alternative. "Lights up and they know who you are/Know who you are/Do you know who you are?"
Queens of Geek (Watermelon Sugar)
This is perfectly breezy summer book to go with a super sweet summer song! Throughout Queens of Geek we find confidence gained, new romances formed, and tons of Comic Con fun. There's also a great glimpse at the world of celebrity and what that means for the characters and their relationships. "Strawberries on a summer evenin'/Baby, you're the end of June". 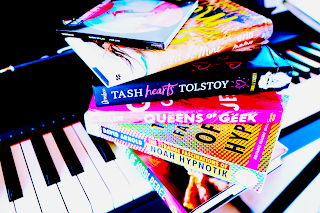 The Strange Fascination of Noah Hypnotik (TPWK)
Last up, I'm pairing one of the more unique songs I've ever heard, "Treat People With Kindness", with one of the most unique, interesting books I've ever read, The Strange Fascination of Noah Hypnotik. It's the most random book I've ever read. The plot is all over the place (there's even a hypnosis storyline), and you never know what's happening next. It forced me to stop trying to figure out what would happen next and just roll with it. In the end, though, just like the chaotic song, the book left me with a feeling of joy and contentment. They were two artistic experiences that completely transported me. "I got a good feeling/I'm just takin' it all in/Floatin' up and dreamin'/Droppin' into the deep end".

Ironically, I didn't find a book pairing for any of my absolute favorite songs on the album! While I love all the songs, "Cherry" is a particular favorite of mine that is totally worth checking out if you haven't heard it yet. The whole song is full of perfectly crafted lines that expertly mix the pain, bitterness, and sadness of a break up. I also recommend the closing track, "Fine Line" because it is pure poetry and also really comforting at the moment. Then there's "Sunflower Vol. 6", a dazzling, retro love song. Honesty, if you have the time, listening to the album in order, in its entirety is a really cool experience. The album is a complete story arch of falling in and out of love with someone while simultaneously learning to be more true to yourself.
Have you listened to Fine Line? What did you think? Do you have any book pairing suggestions for the album of your own?