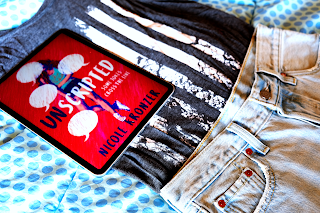 Unscripted by Nicole Kronzer
Overview: Zelda is headed to improv camp with her brother, Will, and his boyfriend, Jonas. They all go to improv class together in Minnesota where they have a great, supportive coach and a balanced team. Zelda is shocked to find out that the esteemed camp, started by her improv idol, does not operate under these same principles. She's one of five girls at the whole camp, and they can't even find a female councilor to watch the girls. As the camp progresses, she's faced with blatant misogyny from her teammates and an emotionally manipulative coach who puts Zelda in a confusing position. Even though Zelda only wants to learn more about improv, she's forced to confront the toxic world she's been thrust into. Overall: 4

Characters: 4 I liked Zelda a lot. She's super relatable. Her focus and drive along with some natural talent has given her some really impressive skills in her writing and on stage. It's also given her a certain amount of security in her talent. But she also has a realistic sense of insecurity. While it feels like everyone around her has found their soulmate, Zelda's never even been kissed. She assumes that no one will ever think of her like that. It's that fear that makes her particularly susceptible to Ben, her 20 year-old coach's advances. She's shocked that someone older and hot would give her the time of day, and that reassurance is enough to override the bad feeling she has about him.
Ben is obviously no good from the start. He flirts with 17 year-old Zelda from the start and becomes progressively more manipulating and intimidating as the book progresses. He flip-flops between yelling and being outwardly hostile to her in class to speaking softly and trying to coerce her in the woods. He claims to care about her but lets the boys on the varsity team put her in compromising positions and makes rude jokes. Ben's character works because he follows all the classic tropes of an abuser while also having that slimy charm that many of them have that makes Zelda doubt her gut instincts.
The other thing that makes Ben's character work in the book and makes the portrayal more responsible is the giant group of friends Zelda has. All of the girls in her cabin rally around her to try to make her feel safe, and Will is one of the first to recognize Ben's behavior for what it is. She has a vast support system that keeps her more aware so that she never fully falls for Ben's hoax. Their support is also very realistic. They're all teens like Zelda who don't have the power to step in to save the day. They encourage Zelda to talk to the camp leaders, but they also respect how she wants to handle things. I also like that as time goes on, more characters come to realize what is happening and work to let Zelda know she's not alone in ways that they think they can. Some of the other coaches start checking on her and even a few of the boys on the team start to realize what's happening isn't okay, even if they aren't strong enough to stand up for her.
The biggest take-away from this giant cast of characters, for me, was that it illustrates just how complex and difficult it is to call out abusive or unfair behavior as a minority, especially when there's no one like you with the power to advocate on your behalf. Zelda is left more vulnerable because there aren't any women on staff for her to go to. The boys who start to recognize the unfair treatment against her are too scared of being looked down or called names to publicly defend her. The camp directors are too concerned about funding and image to listen to her assault complaints and take them seriously. It turns out that few of the people at the camp think that what's happening to Zelda is okay on any level, they just don't want to disrupt their gainful positions to help her.

Plot: 4 There's a good mix of serious discussion and summer camp fun in the book. There are many great scenes of her bonding with her cabin mates and meeting a kind group of Boy Scouts from the neighboring camps. It seems like Nicole put a lot of thought about placing cute scenes to break up the serious moments and showing the whole camp experience.
The arch of Ben's abuse and manipulation, though, is really front and center. Nicole does a good job of adding small details and moments that add up to the larger, scarier encounters. Zelda also has very realistic feelings about what's happening. On the surface, she can see what Ben is doing, but in the moments he is giving her positive attention, she washes all the negative away because they quiet her inner self esteem issues, and it almost feels like validation. She spends a lot of time questioning and confused about if she does want what's happening. When she decides she doesn't, she's a serious victim to the power imbalance and has no adult to turn to. She worries about placating him and defending her place on varsity while also maintaining her personal safety. The more she pulls away, the more aggressive he becomes. Zelda shows how complicated it is to deal with a situation like that, especially in a professional setting. I really commend how Nicole handled the topic. I just wish that the ending had showcased more of what happened when her parents became involved again and the aftermath instead of rushing through it. It felt like an important element had been missed in the full slope of the story.
The other element I didn't really love was the romance with Boy Scout Jesse that sorta came out of nowhere at the end. I liked her hanging out with the Boy Scouts and how they showed a direct foil to the sexist attitude of all the boys at the camp, but I felt like adding a romance to the subplot was just a little much. It seemed like the author used it as a way for Zelda to reclaim the power over her body and romantic life, but it came off as rushed and sudden to me. I would've rather seen Zelda take some space to really process the events of camp before nosediving into this romance with Jesse.

Writing: 4 Overall, the book moved well and flowed nicely. It was engaging, and I managed to read it in two days. My only issues were minor pacing moments. There were scenes that felt way too drawn out and others that felt glossed over, and I wish that the length of some scenes had been switched. Also, the book is heavy on giving full accounts of every day of camp until the end which got a bit tedious at times as camp days often look very similar.
I also wish we'd gotten less middle and a slower unraveling of the ending. I felt like every element was so carefully built, but the resolution was a bit rushed and messy. To do the plot line justice, there needed to be more explaining of what happened with Ben, the Pauls, and the camp. It just felt like a whirlwind, and I felt like Zelda's voice and the emotional impact of it got lost as well. She basically told everyone she was fine, and it didn't have much of an effect so that she could continue focusing on Jesse.

Random Thought: There are so many YA books about improv! I didn't really know that was a major things teens did until I read so many books about it. I know plenty of theater kids in my real life, but none who are focused on improv. I feel like I know all about it now, though!


If You Liked This Book...
Crying Laughing
Have a Little Faith in Me