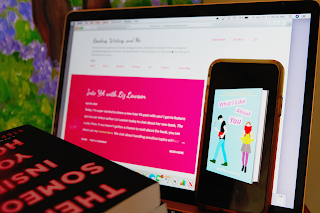 What I Like About You by Marisa Kanter
Overview: Kels is a popular teen blogger. On One True Pastry (OTP) she pairs cute cupcakes with her YA reviews. Over the years, she's gained the attention of the book world being featured in media articles and hosting major cover reveals. She's also found a community with her fellow teen book lovers and met her best friend, Nash. Sure, her IRL social life is close to nonexistent because she moves so often, but that doesn't matter as much. The only problem? Her latest move to Middleton, Connecticut puts her face to face with Nash. Her Nash- who doesn't know that he's staring at his best friend and crush because Kels is a pseudonym. Nash is meeting Halle for the first time. Will Halle be able to connect her two worlds before they destroy each other, or will she be too scared of being left to tell the truth? Overall: 5
(Get ready for this review cause it's going to be loooong. I have way too many thoughts on this book)

Plot: 5 There's a lot of plot threads here to go with the character archs, but I'll try to keep this briefer. The main one is this whole Halle-Nash-Kels strangest love triangle of all time. As Halle points out once, it's a love triangle where she's on both sides. I thought that this aspect was going to frustrate me to no end. Usually, these kinds of things do. It could be solved so simply if you just opened your mouth the first time, but here, I didn't have those thoughts. The approach to it was so nuanced and developed, I fully understood why Halle fought so hard to keep her Halle and Kels life separate. As it got increasingly messy, I couldn't be mad or frustrated. I just felt sad for her and where it was probably going. It all was justified, and that really impressed me. The confusion and the intense identity questions that were intrinsically tied into it were some of the best parts of the book.
There's also a thread about what it means to be a teen blogger and what that entails. Though Kels is far more popular than I'll ever be, I recognized a lot of her struggles to be taken seriously in the wider publishing world and how validating her little successes were on the way to bigger goals. I understand her fears and thrills and the ups and downs of it all. I loved watching her journey, and it was an incredibly realistic portrayal, probably due to the author's past.

Writing: 5 The thing about What I Like About You is that I didn't think about the writing at all as I read it. I was so firmly situated in Halle's head that it just felt like I was living her life. Nothing about the way that translated to the page took me out of the story or made me feel like these were approximations of teens. It hit all the right notes, including the remarkably real DM conversations that are peppered throughout the book. I just felt seen and understood and incredibly invested the entire time. It's a book that's clearly for teens very intentionally.

Some Notes:
Most of the negative reviews I saw on GoodReads for this book are angry that the characters talk about how YA isn't for adults. This made me really hesitant going into it because I'm not generally a fan of people policing what others can and can't read. Here's the thing, though. There's one off handed comment that one teen makes that YA isn't for adults that's a little sharp, but it's also part of a major conversation about teen's place in their own community. She's rightfully upset because adults are dictating the market and placing their voices above the teens in the community. And, what she said isn't wrong. YA should be for teens before it's for anyone else. I love it when adults read YA, but it's not for them. They should interact as observers looking into a world instead of experts or people that stories about teens should be created for.
This is especially important to emphasize in light of a major dilemma in the book. Halle's favorite author makes a ton of insensitive statements about how she writes about teens instead of for teens and that she deserves to be taken seriously because of it. YA should be taken seriously as important work because it already is. Teens liking something shouldn't make it inherently bad or less than something for adults, and you shouldn't have to devalue your readership in the hopes of wider recognition. It's very nuanced how Halle deals with basically being rejected by the creator of the book that made her blog what it is today, that she's put so much time and energy into promoting.
Teens have less of a voice in the space as it is, and it's particularly painful when we're ignored in one of the few places that should be for us. It happens far too often. Like I said, adult readers are a great part of YA and contribute to the genre, but teen voices, teen opinions, and teen reviewers should be centered in discussions about YA and the books made for the category. I don't think it's a bad thing that these teens felt a bit resentful about being erased or that Kanter gave a voice to that on a major platform. There's a lot of awareness in the way that Kanter addresses the issue of teens place in YA, and I don't think that should be ignored.
I particularly like what Halle has to say at the end when she has to answer a question about what her place in YA will be when she's no longer a teen. It's exactly how I feel, and I think makes it pretty clear that the author isn't against adult readers.
"I'll always read and love YA. But it won't always be for me, you know? So then I have to make sure to advocate for the teens it is for."

This book meant a lot to me. It's definitely earned its place in my permanent collection and is definitely worth a read.