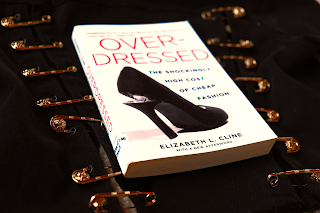 Note: Sorry this post was so long. This book sorta released a lot of pent up feelings. I did want to share one Instagram account that I've found useful as I've searched around for resources. @Fashionourfuture has some inspiring advice and pledges with the aim towards improving the fashion industry and just being more conscious of the impact of fashion. I like having that reminder in my feed as I think about what I can do to be a part of the solution. It gives me a sense of hope.