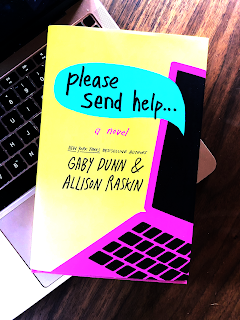 Please Send Help by Gaby Dunn & Allison Raskin
Overview: Ava and Gen have been friends forever, and now they're long distance friendshiping (finally in the same time zone at least). In this story told through emails and texts, Ava and Gen offer each other moral support as they traverse the ups and downs of life at 22. Overall: 4

Characters: 4 Ava and Gen both have a lot going on in their lives, and they handle these situations with varying degrees of success. Ava is living in New York working at a late night show. Office politics take her anxiety to new heights, and she makes her fair share of mistakes. What I really liked about Ava, though, was that no matter how catastrophic the scenario was or how overdramatic she got, she was always able to put a new spin on the bad things in a way that was not peppy and sort of annoying but refreshingly realistic.
Gen, on the other hand, is a lot more out there. While Ava navigated a lot of more practical situations, Gen moves to Florida to work at a conservative newspaper that is nothing like her extroverted, bisexual self. In her attempts to make herself feel more at home, she bounces from outlandish activity to outlandish activity. I never really got to connect with her because her plot lines were so over exaggerated.
I also love that sprinkled in with the villains in their respective lives they both found great friends to help keep them grounded when a hug couldn't be sent via text.

Plot: 4 This book is wacky and out there, and that's something that took me a minute to get used to. Gen's plot feels like it bounces from fighting the newspaper to the bar to the cat she took in off the street without taking to the vet first. While the early twenties period of life seems to be marked by instability and mistakes, Gen's story seemed to be reduced to very little to play it up for laughs.
I really enjoyed Ava though. She's taking on the big city totally lost and full of anxiety. She navigates pitfalls and bumps in the road with some dramatics but also a centered core from office romance gone wrong to a bad boss to feeling isolated and out of place.
I do love how the story revolves around a really strong friendship that exists purely over the internet. I feel like a lot of friendships get invalidated if you can't see each other often, but technology really has allowed friendships to overcome distance and even make people closer.
Also, I've seen conflicting things about whether this is a standalone or a sequel (I've seen both), and I think reading the first book would offer a lot more context about their college time, but if you haven't read the first one yet (like me), you'll be totally fine.

Writing: 3.5 I really loved the format. It fit with their comedic style very well and quickened the pace. I also like how comfortable the friendship feels. They have amazing chemistry, and I love how it's centered on them navigating their separate lives together instead of all about their tumultuous friendship. It's also great that they were able to address some serious issue without making the book sad. Ava embraces her life and learns to be more comfortable with herself. There's discussions of finances, alcoholism, STDs, and mental health in a way that's respectful of the gravity but not overwhelming.
My only negative note was that at the beginning, I found myself struggling with some of the sort of off comments that the characters say. There were some demeaning things about mental health and other topics that made me almost put the book down and decide it wasn't my thing. Luckily, as the book progressed, that issue seemed to disappear.
Finally, I do want to say that it excites me so much to see books with older characters stepping into the adult world for the first time. While I don't see 22 as YA (since it's become synonymous as teen), as this is being billed, I'm excited to see that Wednesday is making space in their line up for books with college/just out of college characters. Hopefully, if these stories do well, we'll see enough of them to finally build a category of its own.