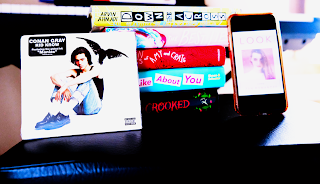 For today's Music Meets YA, I wanted to pair books with one of my favorite recent albums that's been getting me through self isolation. Conan writes the most interesting, witty lyrics and pairs it with careful production that makes it come to life. Think Billie Eilish meets Taylor Swift, in a way. I've also loved watching Conan's old YouTube videos lately because of their positivity. They always make me feel better. I hope you enjoy these song pairings! Let me know in the comments what pairings you would make. Have you listened to the album? Do you have more pairing suggestions?

What I Like About You (Online Love)
What I Like About You centers around an online relationship between Kels and Nash. They're both very invested and think they could be more than friends, but because they only know each other in the online world, they don't think they'll ever get a chance to discover what might be. That's the crux of "Online Love", a short but meaningful interlude on Kid Krow. Both the book and the song show the impact that an online love can have. "Yet we talk like we're living/Only miles, only minutes from another/Just around the block"

Wild and Crooked (Comfort Crowd/Can We Be Friends)
Wild and Crooked was one of my favorite books of last year. It has tons of great LGBTQIA rep without being a romance. It's one of the most epic friendship stories of all time. I had to pick two ode to friendship songs for this one. First up is the second interlude on the album, "Can We Be Friends". It's only a blip, but it's an aggressive promise of friendship. My second pick is "Comfort Crowd" which talks about the importance of close friends but also has a creepy undertone that perfectly fits Wild and Crooked's vibes as they work to uncover a murder that haunts their parents' pasts and their families.
(Can We Be Friends) "And if anybody f*cks with you/They f*ck with me/So, if anybody f*cks with you/I'll knock their teeth out, yeah"
"Comfort Crowd" "We rot, thinkin' lots about nothing/Yeah, I could spend a lifetime/Sitting here talkin'/And even if I cry all over your body/You don't really mind/Say you like your shirt soggy"

The Best Lies (Maniac)
This is a twisty song for a twisty book. The Best Lies is all about manipulative friendships, and it features an unreliable narrator, so you never quite find your footing in this story. "Maniac" plays with those ideas as well. It's a song to yell and jump around to and be confused about why some people in your life just can't seem to let the past go.
"You were with your friends, partying/When the alcohol kicked in/Said you wanted me dead/So, you showed up at my home, all alone/With a shovel and a rose/Do you think I'm a joke?"

Down and Across (Little League)
This is one of my all time favorite books because it dwells on the same idea as "Little League". What does it mean to be an adult and move into the adult world- a reality you've never experienced before. Scott also wonders a lot about what his path is as he chooses to veer away from what his parents expect. "Little League" is a nostalgic look back, wondering when you stopped being a kid. It's one of my all time favorite songs. If you don't listen to any of the others, give "Little League" a try.
"But, lately I've been feeling strange/And everybody's telling me to act my age/I never thought that everything I had, would fade away"

The Seven Torments of Amy and Craig (The Cut That Always Bleeds)
This book is all about break ups and make ups and break ups again, like the song. Told out of sequence, Seven Torments chronicles seven break ups and six make ups Amy and Craig go through over the course of senior year. They're each other's first loves, and they can't seem to let go, but they can't quite make it work either.
"I don't love you anymore/A pretty line that I adore/Five words that I've heard before"

Look (Affluenza)
The song and the book will grab your attention from the start. They both paint the picture of private school, rich, elite society in LA, but instead of the glitz and glam, both showcase a world of a lot of discontentment, pain, and buried feelings. There's also incredible atmosphere in both pieces of art. Neither will give you a tabloid style look, but the stories are just as dramatic.
"Every day's your birthday/You threw a party but you kinda/Hate all your friends/So you're crying in the drive-way/Killing time, getting high/Can't wait 'til it ends"

To wrap it up, I just want to talk quickly about the album. I'm a huge fan of all of Conan's music and his YouTube channel. All of his songs are super relatable, a little dramatic, and always super unique. I like that the album has its share of break up songs but all the love songs are focused around friendship. There's a lot of topics explored on the album that I don't see in music a lot. Songs not mentioned here that I also love are "Heather", "Wish You Were Sober", and "The Story". I've written a lot about Conan's music on my music blog, and you can read those posts here and here.

Links of Interest:
Breath Like Water
Original Story: End of the Driveway
Most Likely
Into YA with Zan Romanoff
Music Reading Themed Lists