YA Book Review: Most Likely by Sarah Watson 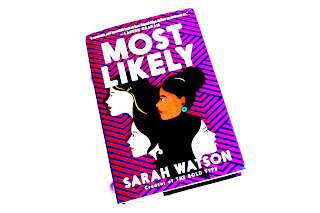 Most Likely by Sarah Watson
Overview: From the start, we know that one girl in the friend group will become president. We also know one will marry a Diffenderfer. Will it be CJ, Ava, Martha, or Jordan? While you're left to wonder throughout the book, I didn't find that to be the point. It's more about senior year and how messy and complicated and scary it can be. It's about realizing that dreams don't have to come true (and how that isn't always a bad thing), how relationships can be good even if they're messy, that parents are people too, and that staring adulthood in the face can be really, really scary. Overall: 5+

I've really struggled with writing this review because there's just so much in this book to discuss and it left my heart feeling so full and seen. I'm not sure how to say everything I want to without overwhelming everyone with a book's worth of thoughts. But I'm going to try.
This book hits every note in the chorus of my definition of perfect book. There are well explored family dynamics, a set of friendships that make their own family, discussion of mental health, learning to know when you're wrong and see outside of yourself, and one of the best handlings of the college admissions process I've seen. The book manages to pack a lot in. It's told in third person which is a bit out of the norm in YA and switches points of view between each of the four girls. It works here, though it can get confusing at times. While the plot starts out sort of awkward with a mission to save the park, the more chapters that you read, the more you just start living their lives. Here are some of my favorite aspects of the book, told in list form because that's the only way I can think of to lay it out.

Before I get into the spoiler-filled area, I just wanted to write a quick conclusion for everyone stopping here. I didn't touch on a lot of great moments in the book because there are simply too many. While, on the surface, it's billed as a sort of mystery about which girl is going to become the president, it's really a book about identity, finding yourself, and learning what's actually important. It's about learning that dreams can change or that you can pivot to make the best of a less than great situation. It's a book about saying the wrong thing over and over again and hurting people we love. It's a book about how getting it wrong doesn't mean you're a bad person or that you can't learn. It's a book about how we sometimes make questionable choices to fill our particular holes. Most of all, it's a book about how being a teen is hard and messy and imperfect. There's not one way to do it, and there's no singular outcome. We're all just people doing the best we can.

They all end up on very different paths than they started, informed by their senior year experiences, but they all are genuinely happy in the end. We spend so much time perfectly picturing our futures, but that doesn't mean that they're set in stone. All of these girls took charge of their paths in a really amazing, affirming way. I'd give this book to any student approaching application season or parent with a kid facing it. I also wish that colleges put more consideration into what their processes and standards really do to student's lives and mental health.

Links of Interest:
Into YA with Zan Romanoff
Look
Blogging Q&A
My Brain In Love