YA Book Review: Breath Like Water by Anna Jarzab 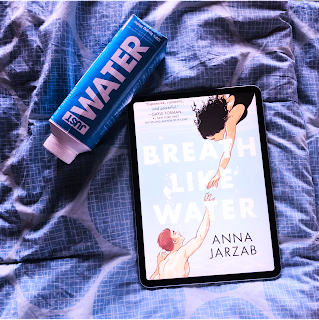 Breath Like Water by Anna Jarzab
TW: Discussions of self harm, Manipulative behavior, Discussions of bipolar disorder
Overview: Susannah has one major life goal: qualify for the swim team at the Olympics. She had a major triumph at the Worlds competition when she was 14, but dealing with the changes in her body and an injury has slowed her down. With a new couch, though, she's working on using a different approach to get back on top. As swimming comes back together, her relationship with fellow swimmer, Harry, starts to fall apart, threatening to distract her from her ultimate goal. Over the course of sophomore year, Susannah struggles to find balance while fighting to achieve her ultimate goal. Overall: 3.5

Characters: 3 Susannah was my favorite part of the book. I like the glimpses of friends and family moments mixed with her view on swimming. She has a hard time figuring out how she feels about the sport anymore. She loves being in the water, but there's also so much more to it. There's the pressure to get a swim scholarship, the weight of all the money her parents have invested in her career, and her coach's mean and manipulative behavior to add weight to what started as a freeing, joyful activity. I loved how she dealt with the complications over the course of the book and how every character had a moment of questioning their choice to swim at that competitive of a level. The sheer intensity of competitive sports are so rarely fully acknowledged, but elite athletes give up a lot to excel at their sport with an uncertain path forward.
I thought her coaches, friends, and family members were good additions, but they generally fell flat for me. They each had a role to play in the story, and they didn't really develop beyond their use to Susannah. It didn't take away from the story for me. I just wished there had been more development across the board.
The reason this ranking is so low is because of Harry, Susannah's love interest. He falls into the same problems as the other secondary characters, but I take issue with it a lot more because Harry has bipolar disorder. I don't feel like what the disorder is, how it effects people, or the nuance of it was well depicted here. I also don't quite get why it was included. The way it was done, it struck me as purely existing to challenge Susannah's story and complicate her romance to take away from her swimming. He felt like a plot point and his major, near suicidal episode felt dramatized to create a problem in their relationship and create the emotional peak of the book. It was sudden, rushed, and not properly explored or built to in the plot. There was little dimension to any of the struggles that were portrayed, and all the conversations about it felt like someone reading off a symptom list from WebMD. I don't have bipolar, so I can't speak on it with absolute authority, but it was just an issue that really stuck out to me. There are books that do a far better job showing the nuance and complexity of bipolar disorder that don't feel nearly as exploitive of its realities.

Plot: 4 I did enjoy reading the book for the most part. It's written in a countdown format with each chapter getting closer to Olympic Trails. While the storyline dragged occasionally, the story overall was pretty engaging. I really liked Susannah's insight into the world of competitive swimming, and she really comes into her own over the course of the book and grows with each competition. You're always wondering whether this competition will be a win or a loss, and you really do have to wait till the very end to figure out if she'll succeed at Trials.
I also like that they followed her for a while after and that it delves into the difficult reality of exiting a sport as Susannah and her friends all go in different directions at the end of the season. It really highlights how the sport needs to do a better job of supporting the young swimmers who are already looking at the potential end of their career.
I wish that the book hadn't had the romantic element to it because I feel like that was the only part of the book that concerned me. There were some flat romantic tropes that went with it that sorta brought the story down for me, and I didn't like the idea of choosing between a guy and a goal she'd worked towards forever. There was just nothing about the pairing that super compelled me. I wish it had focused more on her friends and other team members who also struggled with how long they wanted to continue to devote their whole lives to the sport. I feel like Harry's main purpose was to open her eyes to the idea that swimming isn't the only thing in life, but I feel like her friend, Amber, could've provided the same help and interesting mental exploration without having some less than great "throw it away for love" moments.

Writing: 3 I think I pretty much summed it up in the other sections. This is an entertaining enough read. It'd be great to take on a trip or to the beach. I wish the representation had been a bit more dimensional and that a bit more time had been given to the secondary characters. They all seemed really interesting, we just never got too far into who they were. There were many interesting points raised that never really got to be explored. For being almost 400 pages, I would've loved for it to dig a little deeper. If you're in competitive sports or know someone who swims, I think this book is particularly worth reading. That storyline was a lot of fun and had a great resolution.

*This ARC was provided to me by the publisher as part of the blog tour. This does not effect my opinions.*


More Like This...
When The Stars Lead to You

Links of Interest:
Original Fiction: End of the Driveway
Most Likely
Into YA with Zan Romanoff
Look
New Release Wednesday Reading Weekly Reviews and Recommendations