End of the Driveway 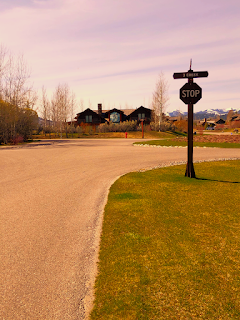 This is a little flash fiction I wrote the other day and felt like sharing, which I don't usually do on here. I was listening to Sody's song "Charlotte" and thinking about friend break ups (which we've all been through) and how haunting they are. I was also looking for silver linings with the world being turned upside down. We're all losing a lot, but I wanted to write a little glimpse of two people who got something back. Anyway, I'm not sure what my point is, so I guess just enjoy.
This is called "End of the Driveway".

You’re at the end of my driveway. I never thought that would happen.
I’m sitting up at the top of it with my back pressed against the splintery wood of the garage. It’s fitting, isn’t it? We’re trying to close the unspoken gap of hurt between us, but we’ve got a giant gulf of black asphalt to separate us now.
“I don’t mind this social distancing thing so much anymore,” I say softly.
“What!” You shout because you’re far away, and it’s windy, and there’s still construction going on all around us. No one felt the need to put that to a stop when the world ground to a halt.
I smirk to myself while I try to decide whether to repeat what I’d said or not. I’m not used to having to speak to people in real life. I glance down at my phone and wonder if this would’ve been better if we just sat in our rooms a couple blocks apart and typed things to each other. It would still open the dialogue.
I try again.
“It’s nice to see you.”
“That sounds so stupid,” you say. I know it’s not supposed to feel like a rusty razor in my chest because there’s a half smile on your face and a lightness to your tone. I try to remind myself it’s not an insult. I don’t need to feel hurt. That’s a hard thing for me to remember sometimes.
“Maybe it’s not so nice. I take it back,” I tell you.
You pick at your shoelaces for a while. Your fingers are still long and perfect for playing the piano. I wonder if you ever listened to Mr. Combs about that. Probably not. You don’t listen to anyone. “It’s not that. It’s just… I feel like we know each other better than ‘It’s nice to see you’.”
“It’s been five years. Do I still know you? Does anything that happened count? ” I grab my sunglasses off the top of my head and twist them around by one of the stems. I don’t want to look at you while I talk. The air is getting thick with awkwardness, and I’m tempted to get up and walk inside. Forget all this. Maybe the whole meeting was a mistake. I yelled to you from my window on impulse the other day. We could go back to pretending that never happened.
“Maybe better than the people who know me now,” you say in that quiet, passive voice I’d slipped into earlier. But I’m paying enough attention to catch it before the wind steals it away.
I smile with my lips pressed so tightly together that they smoosh. “That’s so deep,” I say, sarcasm dripping from my tongue and coating all the letters. “Not like you.”
“Offended,” you say with a fake gasp and a hand over your heart.
If I wasn’t sitting so far away, I’d put my hand over yours and then grab your wrist and twist it. But that would require me to crawl all the way down the driveway, which would scrape all the skin off my palms and knees. That would be gross. And breaking the rules. So many rules.
“Tell me something about yourself,” I say. “Since we’re trying to figure out how much we know.” I take a deep breath and bury my nose between my knees. That should muffle my words enough. “Tell me why you stopped talking to me.” I pick my head up and finally make eye contact. “Or tell me why you paid attention when I yelled your name out my window a few days ago.”
You shrug.
I figure that maybe the answers are better left unsaid after all. Even though I’ve wondered about what’s gone through your head for ages.
I scoot around to my side and lie down flat on the driveway so that I’m staring at the bright blue sky with swirly whisper clouds. It’s weird to know that there’s someone who’s here for me sitting a couple feet away. Even if we’re not saying anything.
When I finally look over, you’re lying down too, toes pointing my way.
“I see a bunny,” you say after a while. Your finger strikes a line through the air.
I scrunch my nose. “More like a toad.”
“No way.”
“Way.” I sigh. “There’s a princess over there.”
We argue about the princess in a way that means everything and nothing at all. It’s funny how the clouds are what finally break the ice. We can’t talk directly at anything. But we can find some metaphors in the sky. And that’s okay for now.

Links of Interest:
Most Likely
Into YA with Zan Romanoff
Look
Blogging Q&A
In This Together Short Stories Writing