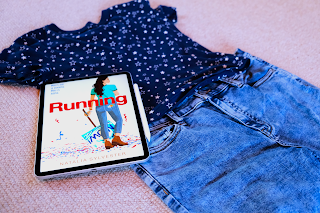 Running by Natalia Sylvester
Get a Copy*
Overview: Mariana has always known her place was to stand by her father's side, smile, and support him. He's been on the path towards becoming president since she was a little kid. She's grown up going through local, state, and national elections leading up to this moment- the GOP presidential primary. Even though politics have been at the center of her life, they don't discuss policies or principles as a family. As Mari makes new friends and her city is confronted by a climate related crisis, she starts seeing the cracks behind her father's hero facade. The more questions she asks, the more she finds her own voice. Overall:  5

Characters: 5 I loved Mari as a character. She shows so much growth over the course of the book. She starts quiet and eager to please her family because it's all she knows. She's proud of her father because she's been told she should be. She doesn't question her family's views until a couple major shifts happen. Her best friend Vivi has to change schools because they can't afford to stay in the district, there's a boil water order for Miami that closes schools and makes people sick, she gets to know Jackie, the student activist her parent have always condemned, and the discovery of all the harm her father's biggest donor has done to the community.
As Mari starts to speak up and find her voice, she has plenty of doubts because she's been so deeply conditioned not to think for herself. Everyone in her family bends to their father- her mother included. Learning about her mom's activist past that she'd never heard of from Jackie helps wake her up. She starts to challenge why her dad feels like he doesn't have to answer for anything- personal or political- or practice what he preaches.
Forming her own opinions leads her dad to lash out and paint her as the enemy. While it's hard for her to be treated that way for saying that everyone should have access to clean water, the brokenness of their family structure starts to come to light. She notices how her mom has gotten quiet over the years but is slowly starting to include herself in the narrative again, and she pushes back at the absolute power her dad has. When she doesn't do what he wants, he breaks the boundaries of a parent-child relationship. He acts like she's entirely to blame for attacking him and ignores that he has a highly disproportionate amount of power in their dynamic. Outside of the main story, this stood out to me greatly. I loved that the parents (and her abuelo and babysitter, Gloria and her partner) are at the forefront of the story along with the teens.
Jackie was my other favorite character. She is seen as radical by Mari's family because she stages student demonstration and speaks out against things like gun violence and climate change. Mari is initially afraid of her, but Jackie shows that she genuinely cares about Mari and how she's been targeted by the media. They slowly form a bond, and Jackie is there to reassure Mari that she's not actually a horrible person for questioning her father's policy choices. Every character is well developed and has a distinctive point of view.

Plot: 5 The book cover the tail end of the GOP primary race for president. The pervasive question is whether her dad will win- and if we want him to. His platform centers around catering to his major real estate donor and deporting people even though his parents escaped Cuba for the United States. I found it interesting that the major devices for Mari's eye opening moments are meeting people who have been directly hurt by her father's policies. I think that's what it takes for a lot of people to realize how harmful politics can be when it doesn't directly touch their lives. It shouldn't take a personal connection to empathize, but I thought that was a great way to show Mari's transition.
I also loved that the book made such a strong point about standing for something. Even silence is a statement, so you might as well articulate just what you intend.

Writing: 5 This book was a great, quick read. The writing is easy enough that the chapters pass quickly without you really noticing. There's a lot of focus on development in the book so that you fully understand the significance of each shift. Mari doesn't really decide to speak up until maybe 60% of the way through. I enjoyed seeing each step in the process, and it did make it even more rewarding when we finally get to that point. I also loved how Natalia integrates so much of Mari's Cuban culture through her grandparents and her mom. It helps contribute to her family life feeling so full and connected to the story.


Get A Copy Now*
Running From Reading, Writing, and Me Bookshop

Link of Interest:
Louis Tomlinson's Walls Meets YA
I Killed Zoe Spanos
Bad With Money
Into YA with Jennifer Dugan

* Please consider using my affiliate Bookshop link if you'd like to buy this book. Bookshop supports indie bookstores, and using my link means I might get a small commission at no cost to you which will allow me to keep the blog running.*
New Release Wednesday Reading Spotlight New Releases Weekly Reviews and Recommendations