The Roughest Draft by Emily Wibberley and Austin Siegemund-Broka 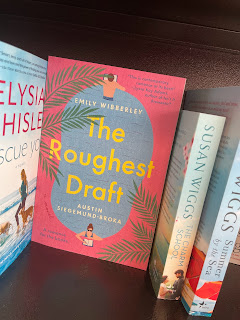 The Roughest Draft by Emily Wibberley and Austin Siegemund-Broka
Buy the Book via Bookshop!

this post uses affiliate links which means I get a small commission from your purchase at no cost to you! learn more here.

Overview: Katrina and Nathan met at a writing program in upstate New York as young adults. From the second Nathan heard Katrina read her first pages at the writing meet up, he knew he wanted to work with her. After one book that sold well enough and a blockbuster book that broke up their partnership, they haven't spoken in four years. Katrina got engaged to her literary agent and gave up writing and Nathan got divorced from his college sweetheart and wrote his first solo book. With his new book flopping without Katrina and Katrina's relationship on the rocks over her early retirement, the only thing left to do is for Katrina and Nathan to come together again in the same Florida house they wrote their bestseller in and write a new book while working out why everything went so wrong. Overall: 5

Characters: I love Katrina and Nathan. Katrina is a little socially anxious and a bit withdrawn and weary of the world after the major success of their sophomore book, Only Once. While the book did incredibly well, that period of time was shrouded by a sense of loss as finishing the book fractured her writing partnership with Nathan when too many messy feelings to ever sort out got involved. Ever since, she's put her life on the back burner, half heartedly planning a wedding in her gorgeous LA house and struggling to even walk inside a bookstore for fun. I related a lot to Katrina and really enjoyed following her story of coming into her own again after heartbreak. While her literary agent and fiancé was a bit cartoon villain evil at some points and it was hard to see anything remotely redeeming about him, he also played an important role in proving just how passive and withdrawn Katrina had become since her split with Nathan.

Nathan is arrogant and overconfident and has a very particular worldview since he came from money and never has had to consider a career outside of doing exactly what he wants. When he goes on vacation, he always rents a Porsche, and when he can't secure a new book deal after his solo novel crashes and burns, he's less worried about the loss of a job and more worried about never getting to write again for publication. On the outside, Nathan isn't the most sympathetic person either. But seeing him work with Katrina and express his love in small and nuanced ways makes Nathan a character you root for and a worth romantic interest.

Plot: I really enjoyed following Nathan and Katrina through writing their new book. Even though writing can be a monotonous and laborious process, the authors managed to capture a highly authentic look at what writing a book and working in the world of publishing while also keeping the pace entertaining and fast moving. Throwing in flashback chapters allowed the scenes happening in the present day to pack a bit more punch as the past and present mirrored each other in some ways.

Writing: I was really surprised that this book suddenly became my favorite for the year. I've read a few of the Emily and Austin's books in the past, and while I liked their first YA, their second book was a huge letdown for me. The Roughest Draft had so much hype going on my YA devoted Twitter feed that I decided I'd read it whenever I got off the library hold list. I'm so glad that I took the chance because this book was phenomenal. Even though I was reading it during the end of school chaos, I never wanted to put it down. This book made me give up mindless TikTok scrolling to make time to read. That's how much I loved it. I think this book is a great fusion of romance and literary fiction and also would be a perfect bridge book for YA lovers that are growing up and expanding their reading taste like I am. It had a quality that retained the best of YA while also infusing in romance tropes. Perfect for fans of Rachel Lynn Solomon's romances.