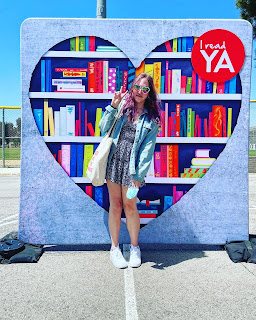 You know those moments when you look back and you get to be like, "My younger self would be really excited for me right now"? I had one of those yesterday as I headed out to Santa Monica to go to YALLWEST for my first time and it's first in the pandemic world. I'd spent a week debating whether I wanted to go or not, but in the end, I decided I couldn't pass up the chance of going to a festival I'd only been able to dream of attending as a young teen when it was 30 minutes from my house. So off to the beach I went.

I'd seen on Insta stories that a friend of mine from school was also planning on attending, so we immediately found each other at the front concourse area. She was already in line for a signing wristband, and we caught up while we waited. I didn't have much of a plan going into the day since I'd only decided the night before that I was going to go. Since my friend had planned her day pretty meticulously, I decided to just follow her program. Since she reads a lot of fantasy, most of the signings she was interested in required wristbands and a keen eye on what time to start lining up. 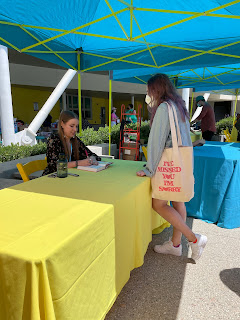 The experience made me realize a few things about the festival. It's relatively small in size and layout, but there's absolutely no way to do it all or even do most of it. Because it's only a single day, everything is happening at the exact same time, and because the number of people who attend is far larger than the amount of things to do, it means that most of your time at YALLWEST will be spent sitting in line. Unlike other book festivals I've attended in the past like Teen Book Con in Houston, signings weren't confined to take place at the end of the day, and there were ARC giveaways happening at scheduled times all day. This really deemphasized panels, which typically were the main event of my prior book festival experiences. You really have to decide if you want to focus on ARCs, panels, or signings, because there's no way to really do all three at once.

This time, I only caught the last ten minutes of a single panel. While I would've loved the chance to see more of the panels, I wouldn't change anything about the day. After my friend got her wristband, we made our way to the Barnes and Noble tent to have a look around. I had plenty of books by the authors at the festival, but of course, they were all a thousand miles away back in Wyoming. Still, I wanted to get in on the fun of the festival, so I broke my book buying hold to pick up two titles, Ophelia After All by Racquel Marie and Year on Fire by Julie Buxbaum. I'd been meaning to read Ophelia for what feels like forever since I've followed Racquel online for years, and I really enjoyed Julie's last book, Admission, so I wanted to see what her next book was like. Conveniently, they both were set to sign at the same time, and neither required wristbands, so it was easy to fit those signings into our plan for the day. 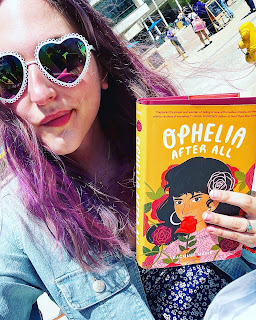 After picking out our new books, we wandered around the festival and visited all of the booths from the various publishing houses. The lines for ARCs snaked and then snaked again as they disappeared out of sight of the main area. Most of the lines were too long to feel like you'd be able to snag one of the limited quantity drops, and other ARC giveaways were ticketed starting at 9:00AM, and since neither of us had picked up tickets (or even realized tickets existed), those were out of the question. The only thing we really got to do in that section of the festival was spin the wheel at the Wattpad booth and collect our anchor shaped "I ship it" pins.

More than anything, YALLWEST reminded me of how book festivals really need to be a team effort. My mom used to hold my place in long signing lines while I ran around to all the shorter lines to get my book signed and pitch my blog. Yesterday, I found myself sitting in wristband lines while my friend ran to get her book signed by Adam Silvera since his line went on forever. I was happy to hear, though, even after his meteoric success from TikTok, Adam still seems as genuine, enthusiastic, and unjaded as ever in giving time to readers at the signings.

It was strange to go and not be familiar with all the authors at signings and panels. It made me realize that I'd started to fall out of the loop on the YA world. I fumbled through my first signing moment as I struggled to figure out what I wanted to say to Racquel once I got to the front of the line. I'd always confidently pitched my teen book blog to each writer I met, playing the precocious young teen card. Now at 18 with a precariously situated book blog, I wasn't sure where I belonged in the dynamic of the day. I realized that I'd always had a mission at these book festivals to network and secure interviews and represent my blog that was my whole world, and I'd never gone purely as a fan or a lover of books like I did yesterday. 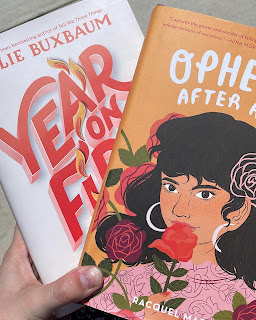 Still, YALLWEST did remind me why I love reading YA. Even though I don't solely exist in this world and I'm starting to want other things in the books I read, I still love the earnest characters and the inviting community. I started reading Ophelia while I sat alone in one of the lines and felt a kinship with her character immediately. The part of me that's still very much a teenager felt seen, even though I never had a prom to care about the theme and I've already crossed the hurdle of figuring out which college I'm going to. I'd wanted a reason to immerse myself in YA again, and the festival gave me a ticket back to old times yet the chance to experience it all in a new way, in my new city, with a new friend. That is really what YA is about in the end, isn't it?

Portrait of a Thief Review

Here's What I've Been Reading in the Last Few Months