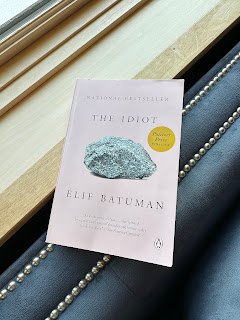 The Idiot by Elif Batuman
Buy The Idiot via Bookshop!
This is an affiliate link which means I may receive a small commission from your purchase at no cost to you. Thank you for supporting the blog!

Overview: Selin starts her freshman year at Harvard in 1995. She's coming from New Jersey, which isn't too far, but she doesn't know all that will be in store for her in Boston. The story follows, in great detail, her freshman year navigating new classes, deciding on a focus of study, making friends, negotiating roommate conflicts, and falling into an entanglement of sorts primarily via email, which is still new and exciting and confusing. The second half of the book sees Selin going abroad to visit France with a friend, go to Hungry to teach English in a village, and Turkey to see family which greatly alters her worldview. Slow progressing, much like real life, the book plods on capturing minute details and feelings in a way that ultimately builds out a compelling inner world. Overall: 5

The best way I can think to explain this book and it's appeal is that it's a longer, denser, but easier to read on a sentence level version of Sally Rooney's books that grapple with many of the same questions farther back in time and with fewer answers and resolution. Personally, it suited me a bit better, but it's definitely not for everyone.

Characters: 5 It took me a while to get into Selin's world, but it's hard not to grow fond of someone you follow on an extremely intimate level for over four hundred pages. We share many of the same worries and fears and outlooks on the world. She feels like an outsider much of the time, not for any particular or even valid reason. Often, she finds herself outside of the narratives that so many people experience, and when her path intersects with those places, she's often confused in how to handle them. She's inquisitive and sensitive but also resilient and sometimes stubborn and judgmental. It takes a long time to break into Selin as a person, but it's rewarding when she does start to open up more.

The other characters float around in the periphery with the same distance Selin originally establishes with the reader. They come into focus slowly as they're being fed through Selin's very narrow point of view. She often struggles to understand the motives of those around her, and that impacts our ability to objectively see the people who populate her life. Her mother seems kind and understanding. Svetlana becomes one of Selin's closest friends, but it's clear that they don't completely mesh or even like each other. Instead, they're trapped in this close, awkward bond that often forms at college. Then there's Ivan who appears as a classmate and is briefly mentioned from time to time who becomes an email pen pal and later much more, though their relationship can't seem to figure out how to morph and evolve with their feelings. Because of this, Ivan is hard to read and comes off both as smart and interesting and as cold and removed and difficult. Still, all of these characters grow with the progression of the novel in incremental yet interesting ways.

Plot: 4 What is there to say for the plot... You get to live a lot of days at Harvard going to classes and doing assignments and having small, seemingly inconsequential conversations. At some points, you could say the book drones on. But there's a certain magic, you realize, by the time you get to the end in how slow the book moves at the start. Like when you start college, you don't know who's going to be important to the story. And there's something unique and interesting about watching these people slowly appear from the background, weaving their way into Selin's patterns and life until suddenly they're the most important people to the story without you totally realizing it. While there's not enough of a love story (or one with a satisfying outcome) to call it a slow burn romance, the romantic element of the story does come to light very slowly and naturally. The way that Batuman handles Selin's infatuation and evolving crush/relationship/situationship really cemented this book being a five star read for me despite not necessarily loving every second.

Writing: 5 I'd say most people's experiences with whether they like a book or not is entirely subjective, but that is even more so with this book. If I hadn't related to Selin and what she went through, I think I would've found enough off-putting things about the story and how it's told to give up on it. But the pieces started clicking into place rather quickly as the 100 page mark passed and the story really kicked into gear, and suddenly, I couldn't put it down. It was cathartic. Her observations left me underlining line after line with whatever random pen I had near me. I think I clicked with this book now purely because it was the right time for me to read it. And it shows that even timing and phases of life can impact what books leave a lasting mark. I'm glad I was able to reconnect with this story at the exact time I needed to.

Buy The Idiot via Bookshop!

re-review: Beautiful World Where Are You