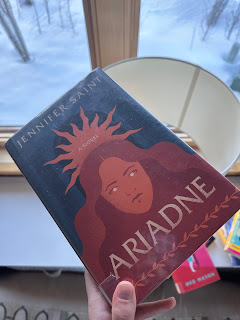 Ariadne by Jennifer Saint
Buy Ariadne via Bookshop
This is an affiliate link which means I may receive a small commission from your purchase at no cost to you. Thank you for supporting the blog!

Overview: So often, the stories of Greek Mythology are told through the glory of the gods and the male heroes. There are women who have striking stories, but they aren't often heroines that get the same honor and recognition as the heroes whose stories they facilitate. In this retelling of King Minos, Theseus, Daedalus, Dionysus, and the Minotaur, it's Ariadne and her sister Phaedra who tell the tale, sharing their fuller version of history and telling the more realized stories of other female figures in mythology who are often made victims for the action of men. Overall: 3.5

Characters: 3 It's interesting to see this new perspective on a well known story. Changing the narrator changes where the story beats fall, and that's probably the best act of characterization in the book. We learn who Ariadne is through which parts of the story she lingers in and which are mere footnotes. She's very concerned with not falling under the same fate as so many women around her and wants to assert her voice and independence. She's very clearly built around the feminist slant of the book in theory and while it's an interesting twist, it sometimes makes her characterization hard to fully see. She's both passionate about writing her own history and extremely traditional.

Her sister Phaedra isn't super well developed besides being painted as the opposition to all of Ariadne's personality traits. While Ariadne is passive and easily placated, Phaedra is meant to be cunning and a force of nature, unwilling to settle for the life she's been given. There's just something about both of their characters that never grows to be more than a quick few adjectives ascribed to them.

All of the men in the story are ironically much more developed. We have Theseus who's originally positioned as essentially a rom-com love interest who's perfect and hot and noble. It's the classic love story. But actually he's conceited and egotistical and horrible deep inside. He's willing to hurt people and violate every boundary to raise his profile. There's Minos who's a horrible king and a horrible father who has been completely corrupted by power. Dionysus is painted as the answer to men with redeeming value. He's the one good one out there who's jolly and kind and respectful, but all men have a deep lust for power that arises sooner or later to a lady's detriment in the world of this book. None of the men in the story are who they reveal themselves to be at face value, and in painting the deception of these characters, they wind up so much more nuanced than our tragic narrators.

Plot: 4 There's a lot of events in the book, and it greatly benefits from the elaborate framework of Greek mythology that the story rests on. Greek myths are some of the most classic, fascinating tales in their own right, and stringing them together is always entertaining. Saint plays in their world well and does piece together the variety of stories to pull from in an effective manner. There's a quality to her writing, though, that stifles the pacing, and the major events become blips and the swaths of emptiness are drawn out longer somehow. Still, the story will leave you with the sense that you've been on a journey as you get to watch the entirety of Ariadne's life play out before the final page.

If you're cool with spoilers, I stumbled upon this Goodreads review from Brittany Smith after I read the book that sums up a lot of my feelings about how the plot and pacing was handled and offers some interesting insight about other choices that could've been made in the novel given the source material.

Writing: 3 I'm not surprised to see this is a debut book. Not because debut books aren't amazing. It's just that I almost immediately picked up on many elements that are often crutches of new writers that don't often make it into the final published book. The narrative voice of the book rests heavily on a rickety second person approach where the narrator is directly addressing the reader, blatantly stating to them that they're going to tell a story. This can be elevated for sure, but there's nothing here that takes it to that immersive level. There's also just a lack of assurance in this storytelling. For something with as much inherent drama as Greek mythology, this book is extremely passive. Saint can't quite narrow in on where to draw out the details and what to pass through quickly, and the pacing really threw me off.

Ariadne herself is just as passive as the narration and phrasing which somewhat contradicts the entire point of the story. Instead of weaving in these threads of having Ariadne take back her own story and have a more balanced perspective, we're only reminded of that element by oddly shoehorned sentences and anecdotes. Similarly, so much of the story doesn't happen on the page. It's recounted by characters who report back to Ariadne or Phaedra. They're rarely witnessing or a part of the action which hampers the story. A random note too that just felt strange was the immense amount of semicolons. I've never seen so many in a published book.

I've grown up on Greek myths since I was 5 and was told them all in Greek class in elementary school. I know the stories inside and out, and it was nice to revisit them. It's just that this retelling struggled to take the rich source material and fully use everything it had to offer, and it never fully formulated the new point of view it claims to offer.

2022 reading stats and year in review