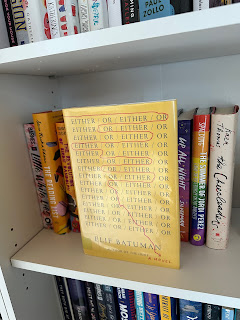 Either/Or by Elif Batuman
Purchase Either/Or via Bookshop!
This is an affiliate link which means I may receive a small commission from your purchase at no cost to you. Thank you for supporting the blog!

Overview: The story picks up with Selin right where we left off in the first novel in the series, The Idiot. It's September of 1996. Selin is still sorting through her feelings about Ivan who slipped out of her life in Hungary, and they're never quite able to retain the same magic they had before. While she grapples with this, she starts a new batch of classes at Harvard, gets used to a new friend group and set of roommates, and sets out to live life to the fullest to enrich her future novels. This largely comprises of trying to find more traditional romantic relationships that go beyond just emails. She follows her path from the year before, hatching a plan to spend the summer in Europe once more where she further completes her journey of finding herself. Overall: 4

Character: 5 If you read my review of The Idiot, you know how much I grew to love the book. It was an incredible joy to be able to once again join Selin for another odyssey in her coming of age, this time during sophomore year. I once again related to many of her struggles to feel like she fit in among her peers and to get on the same page as everyone else with these big life steps and changes that happen in college. During this book, we get to see far more of Selin's passion for writing and her mediations on the craft and how it inevitably ties to how she lives her life which was fascinating being a writer myself. We also see Selin seeking independence in her thoughts, choices, actions, and opinions more than in the first book, though she's allowing more people into her life than ever.

There are more characters brought into the fold of this novel, and because of that, we don't quite come to know this large cast as well as the original crew. Additionally, while the first book revolved around Selin's confusing relationship with Ivan, in this book Selin experiments with briefly dating and hooking up with many different people, most of whom she doesn't know particularly well, so we don't know them either. It's simply a different approach to how Selin chooses to live her life, but the book still stays grounded within her perspective and her honest characterization.

Plot: 4 While this still isn't a largely plot driven novel by any means, it is definitely much more accessible to those looking to dip a toe into the world. The book moves much faster and there's a more immediately present double arc in Selin's determination to get to Europe and her eventual second trip there and in her desire to join her friends in pursuing various kinds of romantic relationships. It feels like a much more conventional coming of age novel in that regard, and the major plot points are far less shrouded in possibly extraneous details than in the first book.

But, for me, the magic of Selin's original story was how the central plot bloomed and emerged so slowly and carefully, materializing without your total awareness of it happening. This book is not as gentle in its unfolding, which will likely appeal to most readers as there's definitely a certain amount of tedium in unlocking The Idiot.

Writing: 4 I enjoyed the two semesters covered at Harvard the most in this book. I started to dwindle in my interest in her travels over the summer. In the original book, she spent more time tied to the major side characters of the book or otherwise staying put long enough to develop nuanced relationships with those around her in Hungary. Here, while the travel section did help assert Selin's newfound independence, it was hard to remain completely invested as descriptions of scenery and people flew by.

Batuman takes on a much more conventional means of storytelling for the sequel. While they are long, this book does have chapters dividing each of the months instead of just parts which signaled the change of semester. It also pays less attention to Selin's specific classes and day to day habits, which the first book spent much a large amount of time on. Instead, it skims the surface to pick up the most interesting happenings of her life, which are super fun and engaging. The book is also all together shorter, which helps it be a faster read. The beginning of the book has some amazing passages and insight, and it was lovely to see the next evolving phase in Selin's journey towards becoming an adult. I enjoyed getting to spend time in her mind. But, if I'm being completely honest, I do have to admit that this book didn't quite have the same sparkle for me as the original story.

Get the Book via Bookshop!