Hole In The Middle 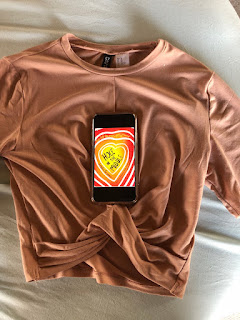 Hole In The Middle by Kendra Fortmeyer (September 4)
Overview: Morgan is like everyone else starting senior year. She's easing into adulting and thinking about her future. She's living in an apartment with her best friend Caro and trying to figure out how to break it to her super driven, successful, fitness guru mom that she doesn't really want to go to college. Morgan also spends a fair amount of time at the doctor's office because she has a peach sized hole straight through her abdomen.
There's been one rule her entire life. Don't let anyone know about the hole, and, besides Caro and Caro's boyfriend Todd, she's succeeded. One night, though, she cuts herself a crop top and goes out to a club called Mansion where she shows off her true self, in all her glory. Photos spread like a wildfire on the internet, and she's approached by a new doctor who thinks she might have a cure. Though it  comes with press crews, a boy who has a lump that won't disappear, and possible cancer, Morgan jumps at the chance to be cured. But is that really what she wants? Overall: 4.5

Characters: 4.5 The characters in this book are incredibly rich. Morgan is multifaceted and experiences many highs and lows both within and in the world. She charts a true path of character growth that's both organic and great. We get to see her develop more of her identity and interpret how she'll take on a situation. It's wonderful to see her go from scorning the online attention to taking control of the narrative to point out that we all have our own holes.
Her best friend is also given a life of her own as she promotes body positivity and tries to figure out what she really wants out of life. Each character introduced has their own storyline and motivation which is nice to see.

Plot: 4.5 The story is quite interesting. Morgan has to handle a unique situation. She's afraid of getting ridiculed for her body, but she also doesn't want to be ashamed of it like her mother. No one else has a deformity like her till she meets Howie, the boy she meets during a gene therapy study who has a lump the exact size of her hole. While at first reluctant because it seems too predictable for them to like each other, they warm up and realize that their lives in the shadows echo each others.
The other major point of the story is Morgan having to deal with the paparazzi who come after her and try to build a story around her deformity, Howie, and the possible cure. She struggle with the attention and is unsure how to cope with it. It's a good reminder that every time you pick up a tabloid, in a way, you're approving of the invasion of someone's personal life. It made me do a lot of thinking.

Writing: 5 This is where the book really shines. I was blown away by Kendra's writing from page 1. It's completely immersive and in control of your emotions and sense of the world. You're living in the book, right there with Morgan from the beginning to the end, making it incredibly easy to read quickly. I'll read anything she puts out in the future.