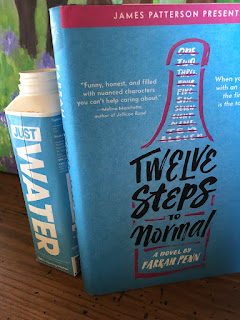 12 Steps to Normal by Farrah Penn
Overview: Kira is back in Cederville after spending sophomore year in Portland with her aunt while her father went to rehab for alcoholism. When she walks back into her old house, she expects it to feel quieter after her Gram's passing. Instead, it's bursting with noise thanks to the three new people in the house that her father brought home from rehab. To make matters worse, her friends all treat her differently, and one of her best friend has started dating her freshman year boyfriend. Life has gotten out of control. Luckily, Kira has a twelve step plan to get her life back to normal. But is that even what she wants? Overall: 4

Characters: 4 Some characters I connected with more than others because I feel like some were built to be more human in a way. I loved Alex. He's the peripheral best friend that will obviously become something more. While he could have gotten as tropey as the rest of her former friends, Penn puts a lot of heart into this character.
This is something she pushes and pulls with the whole time. Her new housemates start as parodies of themselves but morph into people, helping to illustrate Kira's character arc. As for Kira herself, sometimes she seems really genuine and others it seems like Penn is trying too hard to "make" her a teenager.

Plot: 4 The story follows an interesting path. After a month of putting down every book I started after one hundred pages for a whole month, Penn must have put some special magic in here to keep me reading to the end. It's interesting to see a plot that morphs so much as Kira reassesses her goals at each turning point in the story.

Writing: 4 This book is loooong and big. It was intimidating coming out of the box, and I had hope that it would overcome my personal findings with long books, but, alas, this is where the book stutters. With one more round of revision, with an eye for cutting out the nonessential pieces and sentences, the book could have kept a bit faster, more engaging pace.
I did love some of the choices Penn made in the foundations of her story though. While her recovering alcoholic father is a driving force of the story, it's not the sole thing in Kira's life. By showing the group after their rehab supporting each other and Kira, Penn humanizes an issue that tends to be polarized in society.