The Inconceivable Life of Quinn 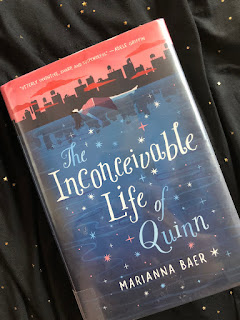 The Inconceivable Life of Quinn by Marianna Baer (375 pages)
Overview: Quinn learns she's pregnant by happenstance. She was visiting a new doctor when they told her the news, which is why she wrote it off. Because she was a virgin, and there was no way she could be pregnant. The new doctor didn't know her; the exam, urine test, and blood test were all jumping to unfounded conclusions. It was so outlandish, Quinn decides to tell a lady at her dad's campaign party about her supposed pregnancy because it was such a funny joke. Once word gets out to the press, Quinn's family's home is hounded by press and people who think she's like the Virgin Mary. While Quinn tries to come to grips with what happened to her, she's also worried about her boyfriend, friendships, and her father's crumbling run for congress. Overall: 3

Characters: 3 Though the author made the characters come off the page, none of them were of much interest to me. Her family and therapist as well as her boyfriend Jesse were the best drawn characters. They exhibited the most consistency in action and presence. Her friends played major roles and then suddenly disappeared without warning only to minority surface later. This frustrated me as the author never bothered to build real dynamics and used it as a crutch for the story when convenient.
Quinn bothered me the most. Through most of the book she came off as sincerely confused but a level headed, logical person. Her therapist never noted any signs of mental illness. Then towards the end, the author seems unclear on whether there's supposed to be an epiphany moment where we realize Quinn was mentally ill the whole time or if the story Quinn has come to believe is really the truth. Regardless of the author's intent, it bothered me that she drug mental illness into the equation towards the end and left the issue so open on the reality of it for Quinn. Again, it seemed like a character trait crutch to be thrown around at convenience.

Plot: 3 Much of this book was unnecessary. There was close to two hundred pages of menotenous repetition. I get that Quinn was on house arrest or feeling this or that. The reader experiences those emotions once. Without new content, the story slumps, and the reader loses their investment.

Writing: 3 I did like the third person limited from a variety of relevant prospectives. I've found it's a style I really enjoyed. The writing itself, aside from everything I mentioned above, was quite pleasant, and the beginning of the story really had me hooked. I just wish I could have kept up the pace and not involved unneeded or unfounded elements.