Ashley has a new book coming out on 3/10/2020, and I have the privilege of being one of the bloggers to take part of the cover reveal on Best Friends Day!
Check out the description of the book and prepare to be excited:

"You can't rewrite the past, but you can always choose to start again.

It’s been twenty-seven days since Cleo and Layla’s friendship imploded.

Now, Cleo wants to erase every memory, good or bad, that tethers her to her ex–best friend. But pretending Layla doesn’t exist isn’t as easy as Cleo hoped, especially after she’s assigned to be Layla’s tutor. Despite budding new friendships with other classmates—and a raging crush on a gorgeous boy named Dom—Cleo’s turbulent past with Layla comes back to haunt them both.

Alternating between timelines of Then and Now, When You Were Everything blends past and present into an emotional story about the beauty of self-forgiveness, the promise of new beginnings, and the courage it takes to remain open to love." 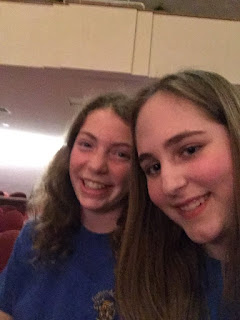 I've experienced awesome friendships and a few really sad friendship breakups, so I can really identify with the plot. Instead, for National Best Friends Day, I want to celebrate my best friend Sonya. We haven't actually seen each other in person in over two years, but we still text each other almost every day even though we're states away! Who's your best friend? Let me know in the comments.

Looking through the pictures of us, it made me realize how few we had together. This one was taken four years ago at a music show our little brothers were in.