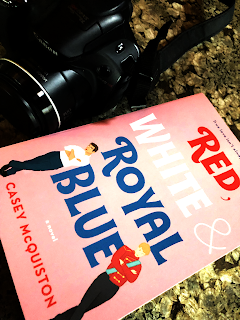 Red White and Royal Blue by Casey McQuiston
*Disclaimer* This is NOT a YA book. The protagonists are 21-23 year old. It's a book that has gotten tons of buzz in the YA community, but it is not YA. I believe I've seen the author self identify this book on Twitter as NA (New Adult), but, since that's not a huge thing at the moment, you'll probably find it shelved in the Adult Romance section. Anyway...
Overview: Ellen Claremont became the first female president in 2016, but, as 2020 approaches, she is preparing to fight to keep her narrow hold on the White House. Part of that plan includes lots of press with the trio of adult children of the President and Vice President.  Norah, the granddaughter of the Vice President, June, Ellen's daughter, and Alex, her son, are extremely central to the campaign. When Alex makes a scene with the royal son Prince Henry at the Prince's brother's royal wedding, the boys are shoved together and forced to fake a friendship to save face.
The more time they spend together, though, the Prince and First Son start to realize that they might feel more than friendship for one another. This creates an international disaster (and one for the campaign) as they dance along the edge of a possible international gossip crisis. Overall: 4

Characters: 5  I love all the characters in this book! June and Alex are both half Mexican on their Senator father's side and create a new president for first children in their visibility. Alex is finishing up at Georgetown with an eye towards being the youngest man elected to Congress. June dreams of being a columnist, but her close position to the president complicates those dreams. While their lives seem originally set on a good course, once romance enters the picture, both kids come to fully understand the magnifying glass they're under.
Nora, who loves stats and works on the campaign, is also a wonderful edition. She might be my favorite character even though she doesn't get a lot of page time.
Prince Henry is also very lovable and interesting. He's withdrawn and always nervous, trained for a unique life that he doesn't fit into. Henry struggles with reconciling his wants in life- his passion for charity and being allowed to acknowledge his sexuality- with the expectations that have always surrounded him. I love how Alex really pushes Henry to come out of his shell and take a more active approach to his life.

Plot: 5 The plot is super fun and twisty for a romance. It's hard to talk about without giving too much away, but I love all the layers here, both in their relationships and on the political scale. I think that even though this isn't YA, YA fans would feel very at home with this book as it explores a lot of realities that carry from your teens into your early 20s with disillusionment, figuring out the boundaries of the world, and defining what your place in it will be.

Writing: 4 My only negative comment is a totally subjective thing. I could never get into the first person limited format that the book was written in. It might be personal preference, or it might be that I read almost all YA and that tends to be first person present, but it did make me wonder what the book would've been like told directly from Alex's view instead of indirectly.
Beyond that, all I can say is that if we get more books like this, I can definitely see NA having a real resurgence which I will shout loudly to support. It's a major gap in the market and RWRB is an amazing first step to filling it.