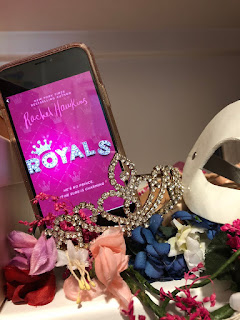 Royals by Rachel Hawkins (May 1)
Overview: Daisy is thrown on a whirlwind journey from the sticky Florida heat to the chilly Scotland summer when her sister gets engaged to the future king of Scotland. While Ellie will be the princess, Daisy and her family must accompany her sister as she gets ready to marry her fiancé, Prince Alex. For Daisy, it means leaving her best friend behind and falling into Prince Sebastian, Prince Alex's younger brother's, friend circle, better known as the Royal Wreckers, and learning to deal with the tabloid trauma. Can Daisy make it through a summer as a Royal? Overall: 4

Characters: 4 I had the best time reading about Daisy. She is hilarious, making her the perfect guide for a book that can't take itself too seriously. I also loved her supportive parents and her perfect older sister. I also thought her choices with the younger Prince Sebastian made for another interesting layer of the story, though I almost wish we'd had a chance to delve into the root of Seb's issues more. Though it's clear who's playing what role in this spin on our favorite British royals, they sure make for a fun story.

Plot: 4 This story is genuinely fun. Full of mishaps and missteps in front of the paparazzi and behind closed door's, you'll want to keep reading to see what happens next. Though it did get a bit repetitive with the constant focus on doing this or that for the press, it can't take away from the guilty pleasure factor of imagining the life of royalty.

Writing: 4 Hawkins gives us a very interesting book. Capitalizing on the royal fever especially with Harry and Megan's wedding coming up, I know that Royal watchers will love this story. Hawkins does maintain her own characters and storyline with her slightly altered setting and cast, but, for me, it did feel a lot like Windsor fan fiction, which is something that I can't say is good or bad. This is the perfect book to kick off some light, summer reads and get ready for the wedding!